Cannondale Kicks Off #LeftyTour in California

Meditation and Cycling – How to Practice Mindfulness While Cycling

The Young family has announced the creation of the Chad William Young Foundation in memory of their son who passed away at the age of 21 in April. The foundation will fund research into the prevention of traumatic brain injury in cycling, compassionate hospital care and two merit-based scholarships.

“Chad was fortunate to have many great mentors, both academically and athletically, in his life and he was eager to pay their support forward,” Chad’s Mother Lois Young said. “Through the Chad William Young Foundation, we aim to honor Chad’s quiet leadership, remarkable intelligence, and kind demeanor while continuing to build upon his legacy. We are passionate about what he was passionate about and want to continue supporting those initiatives.”

Chad’s life was cut short after he succumbed to a traumatic brain injury sustained in an accident on the final stage of the Tour of the Gila, a five-day stage race for professional cyclists held in the Gila National Forest and mountain range in New Mexico. A primary focus of the foundation will be to develop new technologies to protect cyclists from head injuries.

“After many conversations with people in the cycling community, we want to help develop a new technology-based safeguard, rather than a physical safeguard such as helmet, to limit the risk of a traumatic brain injury sustained during a cycling accident,” his father Kevin Young said.

The Chad William Young Foundation will also fund two merit-based scholarships to recipients whose ideals are similar to Chad’s – exemplified by a life well lived, academic excellence, and pursuit of athletic endeavors. The scholarships will be awarded to students at two schools Chad attended – St. Thomas Aquinas High School in Dover, New Hampshire and the Colorado School of Mines in Golden, Colorado.

“Chad loved and believed in education, and we want to honor him by continuing to support others in his name,” his brother Kevin Young said. “Our hope and mission are that through these scholarships Chad’s passion for learning and helping others will continue for generations. It serves as another way for us to honor him by contributing to the communities that he loved.”

All initiatives undertaken by the foundation will be reported on the Chad William Young Foundation website under the “Initiatives” section, so please check back periodically for updates.

To find out more about the Chad William Young Foundation or to make a donation, visit cwyf.org.

The team has also created a new badge in Chad’s memory. It contains Chad’s initials, C.W.Y. as well as the team logo of Axel’s axes. There is a lightning bolt to represent Chad’s positive energy in the world as well as his love for engineering. The 16 tick marks on the badge represent the 16 team members of the Axeon Hagens Berman Cycling Team, including Chad. Lastly, the hashtag #ALWAYSBEYOUNG will be used to honor Chad going forward. This hashtag, much like #PROVEIT, will serve as a reminder for everyone to always be like Chad Young with a well-lived life, a youthful exuberance and making the most of each and every day. 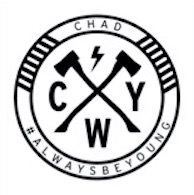