7/19/20 - You probably have noticed the new Giro Air Attack helmet being used by key riders from the Garmin-Sharp and Rabobank teams during the early flat stages of the Tour de France.  According to Giro, “the all-new Air Attack™ is a revolutionary helmet combining aerodynamically efficient design with patent pending Roc Loc® Air system that enhances fit, comfort and cooling power to optimize rider efficiency.”

With a systematic approach to design and wind tunnel–tested performance, the Air Attack offers reduced aerodynamic drag, light weight and tremendous cooling power. Taken together, these factors can help riders to use their power more efficiently, creating what Giro calls “Free Speed”. The Air Attack will be available in two versions – including one with a magnetically-anchored optical shield, with MSRP of $200 USD and $240 USD respectively. The helmet will be available in Spring 2013. 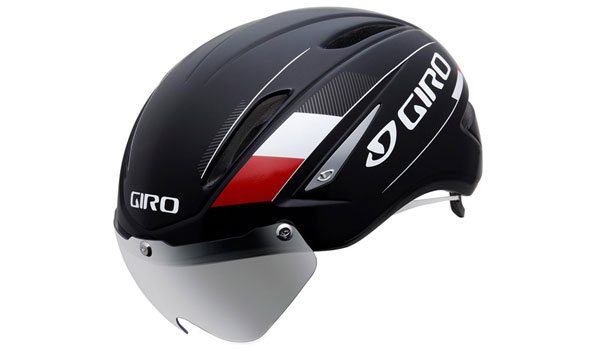 “The two biggest obstacles a rider has to overcome are the wind, which forces a rider to work harder, and heat which forces the body to divert energy to cooling,” said Eric Richter, Giro Senior Brand Manager. The Air Attack can help riders to overcome both obstacles more efficiently, and essentially creates an entirely new category of helmets that are light, cool and aerodynamically efficient at the same time. From road races and criteriums, to the track and triathlon, we see performance benefits for a lot of riders with the Air Attack.”

There are several attributes that contribute to the game-changing design of the Air Attack. First, to minimize aerodynamic drag, the Air Attack™ features a frontal profile similar to conventional aerodynamic helmets, but without the need for a longer tail section. The second is the all-new, adjustable fit system called Roc Loc® Air, which acts as the head form of the helmet and a key part of the ventilation system. By suspending the helmet 3mm above the rider’s head, the Roc Loc Air creates additional ventilation space between the rider’s head and the helmet, and takes advantage of air pressure and flow patterns to create a Venturi effect that forces air throughout the helmet’s vent channels and exhaust ports. Six optimized external vents are also synchronized with the deep channels in the helmet’s liner to further enhance the Air Attack’s cooling power, which rivals Giro’s most ventilated helmets. The final touch, unique to the Air Attack Shield model, is a magnetically-anchored optical shield by Carl Zeiss Vision, which is easy to install or remove with one hand, and can also be flipped upside down during pre-race or warm up if the rider wants it out of the way.