How to Build Stamina and Endurance for Mountain Biking

The age of helmet and bicycle-mounted video cameras such as GoPros, Contours, and Fly 6s has opened up a world of possibilities that enhance recreation and entertainment. But this technology also has legal implications that bicyclists should keep in mind. Therefore, we’ve put together a two-part series on this important issue.

On the one hand, recording your ride can preserve important evidence if you are injured in a crash or if you are stopped by a police officer. If you were doing nothing wrong, the video may vindicate you, or it may show that the person who hit you was at fault.

On the other hand, you should also exercise caution when it comes to video recording your interactions with other people in order to avoid running afoul of eavesdropping and privacy laws.

While most states and Federal law only require the consent of one party to record a conversation, California and a handful of other states goes a step further. The California Invasion of Privacy Act (Penal Code §§630-637.5) requires the consent of all parties to a conversation before recording it. Recording a private conversation with another person without their permission can involve both criminal and civil penalties in California, and any evidence obtained by this method may not be used in court except to prosecute violations of the Act.

The broadest and most important section of this act for our purposes is §632. This provision makes it a crime to use any electronic recording or amplification device to record a conversation “intentionally and without the consent of all parties to a confidential communication.” A first offense is a misdemeanor, but if someone has been previously convicted of a similar offense, it is charged as a felony.

The Act also spells out the civil remedies in §637.2. Damages are to be awarded in amounts of $5,000 per violation or triple of the actual damages, whichever sum is greater. No actual damages need to be shown. Statutorily prescribed damages are rare, and they generally have a public policy rationale. This is no exception. The California legislature was careful to state in enacting this law that its intent was to protect the right to privacy—a right specifically enshrined in the California Constitution.

Furthermore, §632(d) states that recordings obtained in violation of this law cannot be used as evidence, except in prosecutions or civil law suits against the person who made the illegal recording. So if you think that covertly recording someone’s private statements will help you win a legal case against them, it won’t. All it can do is get you into trouble.

What is a Confidential Communication?

The California Supreme Court decided between two competing interpretations in the case of Flanagan v. Flanagan, 27 Cal.4th 766 (2002). One lower court held that a communication is confidential if one party to it “reasonably expected…that the conversation would not be divulged to anyone else.” O’Laskey v. Sortino, 224 Cal.App.3d. 241, 248 (1990). Another court held that a communication is confidential whenever there is “a reasonable expectation by one of the parties that no one is ‘listening in’ or overhearing the conversation.” Frio v. Superior Court, 203 Cal.App.3d. 1480, 1490 (1988). The Supreme Court Flanagan adopted the reasoning of the Frio court, holding that as long as a party to a conversation has an “objectively reasonable expectation that they were not being recorded,” the communication is confidential and the two-party consent rule applies.

So there are times when it is perfectly appropriate to record an interaction. In public places, people do not have a legitimate expectation of privacy and therefore cannot claim a privacy violation if their public words and actions are recorded. This is especially true if you happen to incidentally capture their movements on a public roadway right before a collision.

One tricky question related to this issue is whether you must have consent to continue recording their words and actions after the crash. The answer is that you probably don’t need consent for two reasons. First, there is a good chance that they will become aware of such a camera, depending on its size. Second, if an event took place in public, there is a good chance that there are other witnesses. Some of these witnesses may have stopped to observe, and some may record the encounter on their phones or take pictures of the damage. A person does not have an expectation of privacy after an accident—especially when an injury is involved. When that happens, they are required by law to wait for the police to arrive. This of course means that there is a good chance of any actions or statements being recorded either on video or in an officer’s written report.

Another time this issue can be raised after a bicycle accident is when you are contacted by an insurance adjuster after the fact. Adjusters will often seek to interview witnesses and victims after an accident. Very frequently they are doing this to try to get an admission of fault or other statements they can use to minimize their liability. These conversations are frequently recorded.

I advise my clients to never talk to insurers. Even if you don’t agree to be recorded, they can still use the contents of your statement against you because anything you say that is against your own interest is an exception to the hearsay rule.

Video evidence can be a great tool for getting to the truth and for promoting accountability for all parties involved. But it is important that it be used wisely, especially in a legal environment in which privacy protections are paramount. If you have a legal issue involving video evidence, whether of a police encounter or a bicycle-related injury, contact the Law Firm of Richard Duquette. With 35 years of legal experience, Mr. Duquette can help you navigate the sometimes complex legal issues. Let a knowledgeable and experienced attorney deal with the police, witnesses, and insurance adjusters. If you go about trying to prove your own case without understanding these issues, you can end up not only losing your case, but also getting into serious legal troubles. 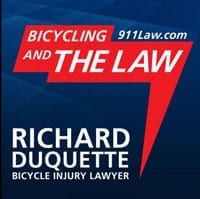