Cycling Miles for Smiles (#Cyclemilesforsmiles) is organizing a cycle trip from San Francisco to El Paso for Mercy Ship’s reconstructive surgeon from South Africa, who is both giving a voice to the urgent surgical need in developing countries, as well as raising funds in able to do his volunteer work. Cycling Miles for Smiles is looking for (sponsored) cyclists who can join him during parts of his journey. In September 2017 (see dates and schedule below), Dr. Tertius Vente will ride through cities including San Francisco, LA, San Diego, Yuma, Phoenix, Tucson to El Paso, hoping to expend his audience and raise funds in able to continue his work in Africa and elsewhere in the developing world. This time he is hoping for cyclist like you, to join him on his endeavor.

The following help is needed for Dr Tertius and Cycling Miles for Smiles during his ride in September. If anyone can assist please contact [email protected] for more information. 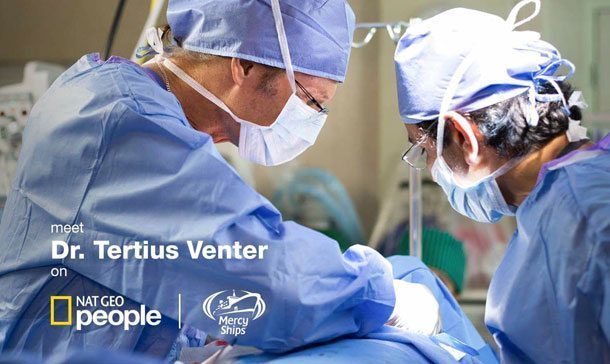 Almost all Americans who rupture a spleen, develop a tumor, or need a caesarean section have easy access to a surgeon who can do what needs to be done to save their lives and get them back to normal life, writes the Lancet, a weekly peer-reviewed general medical journal. That’s not the case in most parts of the world, where it’s difficult or impossible to have surgery when needed. Nearly one-third of the global burden of disease — the collective impact of death and disability caused by all diseases around the world — can be chalked up to conditions that need surgery for treatment. Yet an estimated 5 billion people, more than two-thirds of the world’s population, don’t have reliable access to safe, effective, and affordable surgical and anesthetic care. That translates into millions of unnecessary deaths and untold disability every year.

During the Cycling Miles for Smiles campaign in 2017 we aim to bring this great need to the attention of the American public. Many people are not aware of these staggering numbers. Dr. Tertius Venter, a South African plastic surgeon, who is passionate about the people that deal with the lack of (save) surgeries, will be speaking during this campaign. Besides cycling, he will be sharing from his own experience providing free surgeries in developing countries and let his audience know how it has made an impact in their lives and his. Dr. Venter is a volunteer surgeon with Mercy Ships, Operation Smile and PAACS and has, over the last few years, undertaken several solo cycle tours. He believes everyone, medical and non-medical, young and old, rich and poor can make a positive change.

After cycling from New York to San Francisco in 2015, he will revisit some of the cities he passed trough, in September 2017 on his route from San Francisco, LA, San Diego, Yuma, Phoenix, Tucson to El Paso, hoping to expend his audience and raise funds in able to continue his work in Africa and elsewhere in the developing world. This time he is hoping for cyclist like you, to join him on his endeavor.

Tertius Venter is a South African plastic and reconstructive surgeon and motivational speaker who has dedicated his work in recent years to provide free surgeries to restore hope and dignity of thousands of children and adults in countries which lack adequate health services. Tertius gives his time, expertise and skills for Mercy Ships, and also works for Operation Smile and PAACS. During several extensive Cycle Miles for Smiles trips, he has spoken at universities, high schools, business clubs, churches, and on TV, radio and with magazines. Currently dr. Venter is featured on National Geographic in the documentary series: Surgery Ship, based on real life events filmed aboard on the hospital ship the Africa Mercy.

Happy Day is a start up concept- en campaign bureau that specializes in campaigns that involves people to get involved with the cause and make a positive impact. Miranda Tollenaar, from The Netherlands, who is heading Happy Day, has been part of several projects on Mercy Ships where she met Tertius Venter. She has organized the Cycle Miles for Smiles tours to the USA in 2015 and to the UK in 2016, which has helped Tertius to share his story to millions of people.

During dr. Tertius’ cycle trip in 2015 through 21 states of the USA we have built meaningful relationship with people who supported his cause. The idea is to return to some of those strategic contacts and this time ask their networks to get in action. This would expend our network in an effective way.

To enable us to raise funds we will approach two of our contacts and ask them to organize a fundraising dinner or event. On top of that, we will ask the Yuma Region Bicycle Coalition to organize a fund-raising cycle trip from Yuma to Tucson and ask each cyclist to raise 500 Dollar or more to donate to the cause. Also we will welcome five or six cyclists that will join Tertius during the entire trip or sections of the trip.

For this tour we will contact churches, schools, Business clubs and universities, such as Stanford. PAACS and USCD, to arrange speaking opportunities. Dr. Tertius Venter is open to adjust his presentation to different crowds, time slots and settings.

In 2017 we want to invest in the relationships that have already been built. With this tour through California, New Mexico and Arizona we hope to reach five million people through the media, universities and four churches. Besides raising more awareness concerning the medical situation in developing countries, we will also share a story of hope by showing the transformed lives as a result of the surgeries dr Tertius has performed.

We would love to see people make a change, either by joining one of the organizations dr. Tertius works with, by financially supporting his work or by joining him on his next cycle endeavor. We are convinced that, once people know about the surgical need in developing countries; this will lead to action.

From Yuma to Phoenix we would love the Yuma Region Bicycle Coalition to join Tertius for a cycling ride. Preferably between 20 to 40 cyclists (ore more). We would like to challenge every participant to raise 500 Dollar or more and to become ‘an voice’ for this event on social media.

(Cities and dates are being worked on)

We will provide a Cycle Miles for Smiles tshirt for everyone that will joins as a sponsor cyclist.

You are welcome to bring your own bike. If you fly, please make sure to contact the airline you are flying with.

We’ll be staying with families and in inexpensive motels/guesthouses.

Great to know you are interested to join us on this cycle ride! By doing so, you can truly make a difference in the lives of people on the other side of the world. Help us spread the story by becoming a part of our team. We hope this info may help you to find out why and how.

How fit should you be:

Those who join us on the tour, should be experienced long distance cyclists and be able to cycle about 12 miles (20 km) an hour. We usually have a one hour break during lunch.