Architect Richard Moreta and a truly stunning international team are developing the ideal zero-emission transportation systems for the cities of our future. Project “MINILOOP” by Smart Dimensions and R A+D is an elevated pipeline system that can include an enclosed cycleway for conventional and electric bicycles, as well as having the option of additional enclosed electric vehicle highways for a year round, all weather transportation system. These new public transportation brings great ease and sustainability to commuters, as well as brings innovative renewable energy technologies to our public arena. Its crowdfunding campaign will be launched. 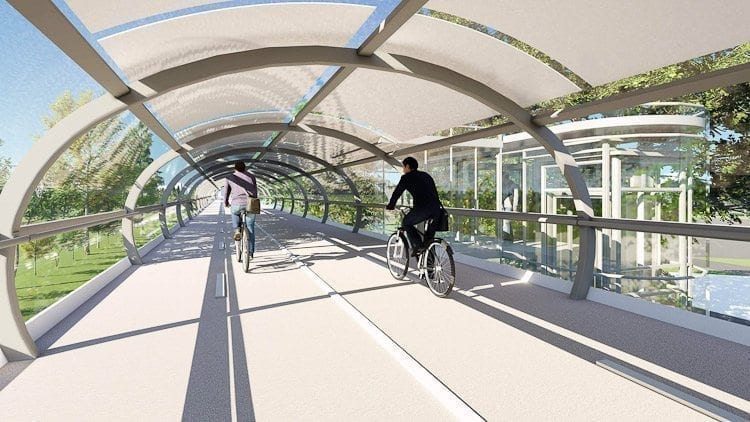 To be the most efficient net-zero transportation system, the MINILOOP totes an effective combination of renewable energy technologies to power itself, as well as supply surplus power to the local city grid. These renewable energy platforms can also be customized to each MINLOOP location around the world depending on what renewable energy resources are readily available, as well as the budget for each location. Terminal points along the circuit also include electric bicycle and vehicle charging stations and electric bicycle rentals, giving more ease to the EV users and more incentive to go electric.

MINILOOP is a platform that can be custom tailored to each city it becomes a part of, giving people the opportunity to unite parts of our cities like never before. Even the structure of the MINILOOP itself can be adjusted to a more open air design and structure for cities with temperate climates, and more insulated, enclosed design for cities with more extreme weather. Adjustments in the overall structure can also be made to make MINILOOP more cost effective to countries around the world. 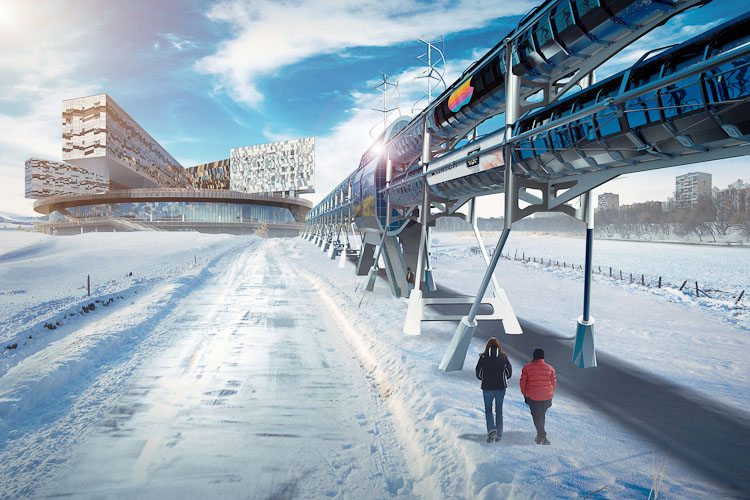 MINILOOP helps create less traffic and pollution simultaneously; by both taking more conventional motor vehicles off the road and giving more vertical space to grow plants to further filter the air. It also minimizes traffic and cycling incidents, creating safer environments for families and commuters. We now have the opportunity to connect major nexus points of our dynamic cities, such as schools and universities, art business tech and industrial districts. Also, we are able to bring more interconnectivity to parks and nature areas, as well as agricultural hubs just a short trip out of city center. Each city brings a new unique twist to its MINILOOP system for the region’s and city’s culture, climate, and geography.

“We are very excited to bring this innovative masterpiece to life, as the people and cities of the world are hungry for novelty and sustainability in their daily commute. MINILOOP systems offer unprecedented opportunity to revolutionize how we travel in our day-to-day lives, while taking care of our communities, cities, and environment,” says Kyle Hubert; Vice President of R A+D. “We would love to collaborate with companies and individuals such as Elon Musk’s Tesla Motors and newly aquired Solar City/Tesla Energy, Toyota Motor Company, and Hyperloop in hopes to offer the best zero emissions transit capabilities possible, including EV Charging stations and EV lots for their EV and Plug-In Hybrid models.”

Long-term benefits of implementing the MINILOOP system also include an opportunity for communities to create new healthy habits or strengthen current active lifestyles. Creating interdependent routes for bicycles and other small electric vehicles can allow for greater peace of mind when people around the world begin moving towards more economic and ecological means of transportation. Students and families also receive greater peace of mind with their commute to school and occupations being much safer and smoother. This heightened reassurance will inspire more and more people to take to the roads by electrical or conventional bicycles and electric vehicles. 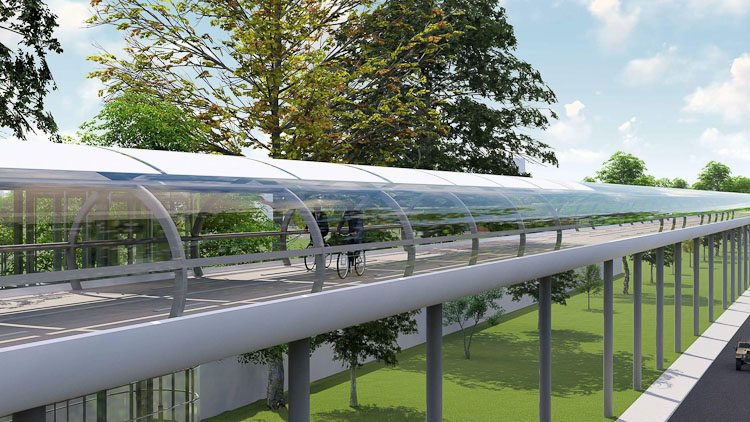 Street lights, public park fountains, recreation areas, and so much more can be powered by the MINILOOP platform. Small portions of a city can have microgrids implemented  using technologies such as Tesla Energy Powerpacks as well.  This will allow cities to become less dependent on the old grids, and allow a transition into 100% sustainable, renewable energy powered cities.

As more green public-transport and green private vehicles are being created around the world, the higher the demand for charging stations and spaces for EV parking.  R A+D and Smart Dimensions feels confident that  this series of charging stations along the MINILOOP system gives much more freedom, range, and commuting opportunity for existing and new EV owners whether or not they are using the MINILOOP transit system routes directly. Uber and Lyft’s newly acquired bikeshare companies would also be greatly benefited by MINILOOP. Combined with other long distance transportation systems such as the Hyperloop, more communities around the world can begin lowering their carbon footprint, and raising their focus on the sustainability and wellbeing of the people and environment around them.

With these advancements in 3D printing and sustainable building materials such as Hempcrete, the cost and time of construction is decreased massively.  Costs for MINILOOP, including renewable energy technologies and rental bike purchases varies between various models, but with 3D printing we can greatly reduce the costs of construction.   This opens more opportunities for communities around the world, from small farming towns to urban cityscapes, to travel in their local MINILOOP circuits and power their communities.  Our world is in for a treat with all of the incredible innovations of our era, making it an abundant and prosperous place.

This month, RA+D launches their Indiegogo for Crowdfunding their goal of $400,000 to develop the prototype in Denver, Colorado in a 3D printing construction facility that will be ran by RA+D and it’s partners.  RA+D Principal and founder Richard Moreta will also utilize his non-profit Green Container Aid International to funnel resources and building materials donated by potential corporate and private investors.

Ride with Us – Video & Experience the Claremont Hills Wilderness Park