Tour of the Gila: Hall and Reijnen Sprint to Victory at Downtown Silver City Criterium

One of the most thrilling and spectacular one-day races of the year, Strade Bianche has a new winner in the name of Julian Alaphilippe, who resumed competition after a high-altitude training camp in Colombia and picked up where he left off, surging to his fourth victory of what’s shaping up to be an outstanding campaign for the 26-year-old, now in his sixth season with Deceuninck – Quick-Step.

“My start to the season was already good, with three victories in South America, but to win here is incredible! My team did a great job and having Yves and Zdenek together with me in the final was perfect for us. I had a good day and strong legs, but was also lucky not to have any crashes or punctures. Strade Bianche was my first big goal of the year, and to win here, at my very first presence, is truly amazing”, said Alaphilippe after becoming the first Frenchman to conquer the Italian World Tour race.

Despite not having the heritage of other one-day races, Strade Bianche has grown in terms of reputation and prestige since 2007 – the year it was created – becoming an instant favourite, and at the same time, one of the most revered, fascinating and unpredictable races on the calendar, dubbed “the sixth Monument of the year” by many, thanks to its unique combo of gravel roads, leg-sapping hills and Tuscan scenery, all leading to the breathtaking finale in Piazza Il Campo, the stunning square commissioned by the Council of Nine more than six centuries ago.

Strade Bianche played totally to our team’s strength, which had again the numbers inside the last 50 kilometers, when Julian Alaphilippe, Belgian Champion Yves Lampaert and Omloop Het Nieuwsblad victor Zdenek Stybar made the cut over the Martino in Grania dirt road sector, part of a 16-man group. Strangely, it was on Monteaparti, at 800 meters, the shortest gravel segment in the race, that the winning move took shape, when Jakob Fuglsang (Astana) accelerated, being joined only by Julian and Wout Van Aert (Jumbo-Visma). 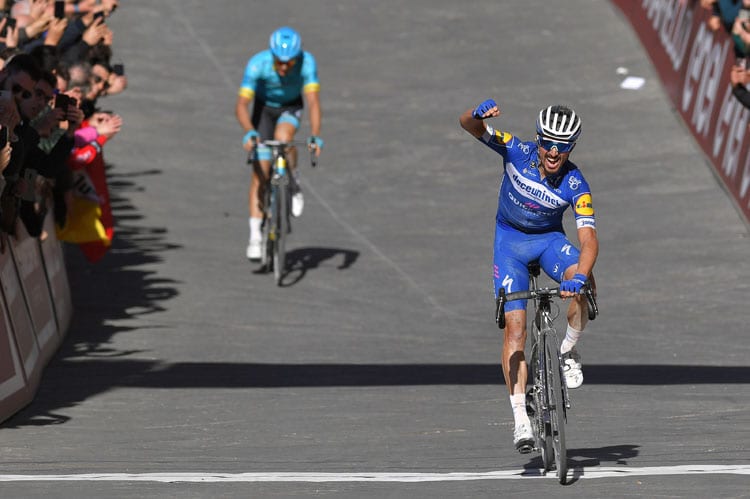 The trio traded turns until the steep Colle Pinzuto, where the Belgian was dropped, leaving at the front only Alaphilippe and Fuglsang, who traded turns and worked well together, opening a one-minute gap over the main chasing group, where Lampaert and Stybar continued to do a magnificent job in chasing down attacks. Just before Via Esterna di Fontebranda, on the outskirts of Siena, Van Aert bridged to the leading duo, but only for a brief moment, as he was again distanced.

On Via Santa Caterina, the Dane tried to put Julian on the ropes, but Deceuninck – Quick-Step’s pocket-rocket climber responded with ease, before getting out of the saddle and putting in an explosive attack on the 16% gradients, coming round and dispatching his opponent, thus ensuring he would go first into the final corners of the race.

Alaphilippe took his small gap onto the downhill finishing stretch in Piazza del Campo, where he celebrated his fourth victory of the season and delivering another perfect day for Deceuninck – Quick-Step, who placed three more riders in the top 15 – Zdenek Stybar (4th), Yves Lampaert (11th) and Pieter Serry (13th) – and maintained a tight grip on the World Team Classification.

“In every race, others are looking at us to take the responsibility, and that’s what we did today. We were with three riders in the main selection, controlled every move and did a really smart race in all the key moments. When Fuglsang went, I knew that it might be the winning move. He was very strong today, but I made no mistakes and remained confident, although it wasn’t until the final corner that I believed I could win this race, in my opinion, one of the toughest of the calendar. It’s a wonderful victory, one which makes me extremely happy and boosts my confidence ahead of Tirreno-Adriatico”, concluded Julian after netting Deceuninck – Quick-Step’s third win at Strade Bianche.