2020 marks the 14th year of the USA CRITS Series, the premiere cycling series in the United States. Criteriums are the most spectator-friendly and enduring form of bicycle racing in America. USA CRITS brings forward a team concept and the ability for fans to engage with the sport through live streaming of each event.

The 2020 Series season will once again feature Birmingham, Alabama at the Birmingham Hammerfest fueled by BOLT24. The Hammerfest provides a pre-season showcase for USA CRITS D1 Teams as well as amateur racers. On Friday prior to the racing, D1 Teams will assemble to produce the season’s media content. Saturday features a D1 Team race format that is the pilot model for future USA CRITS events. On Sunday, fans can join D1 Teams and former Olympian Frankie Andreu, on a supported training ride.

Ten events across the United States will make up the 2020 USA CRITS points calendar, landing in many of the country’s major cycling markets. The Colavita #racefororange will kick off racing for the 2nd year in El Paso, Texas at the Sun City Crit . The Series then ventures back east to Spartanburg, South Carolina and the Spartanburg Regional Healthcare System Criterium followed by the Athens Orthopedic Clinic Twilight Criterium in Athens, Georgia. Both events are USA CRITS back-to-back points races and will also serve as the kick-off the annual Speed Week in the Southeast.

The middle of the season features two of America’s most dynamic cycling events. The Winston-Salem Cycling Classic in Winston-Salem, North Carolina which includes a music festival over Memorial Weekend. Winston-Salem also hosts America’s only single-day UCI road race for men and women held on Memorial Day. The Saturday criterium has been labeled the hardest of the Series as international UCI teams coming for the road race get a taste of American criterium racing. Saint Francis Tulsa Tough in Tulsa, Oklahoma is a racer favorite and closes out the middle of the season with three days of racing and the Friday USA CRITS showcase held in the Blue Dome district.

The western swing of four back to back races has proven a brutal test for teams as these events decide who is in control headed into the finals. ASWD Boise Twilight kicks off the set and will also serve as the final event for challenged athletes before the Tokyo Olympics. Boise will also feature America’s only UCI time trial event, the Chrono Kristin Armstrong, on Friday. The Salt Lake Criterium returns for the 2nd year racing through the middle of The Gateway, a unique open-air commercial development. Next up is the Toyota San Rafael Sunset Criterium, celebrating 20 years and its prominence as California’s largest criterium. The western event wrap up with the Audi Denver Littleton Twilight Criterium . The Denver area boasts one of the strongest regional cycling communities in the country and draws one of the largest crowds of the Series.

The Benchmark Twilight Cycling Classic in West Chester, Pennsylvania will play host to the final event of the Series. The conclusion of the Series will determine the final standings for leaders’ jerseys and team competitions in this vibrant downtown setting. “The Benchmark” which attracts thousands of fans, serves as a benchmark for American criterium racing and its new date as the Finals.

USA CRITS will again be partnering with USA Cycling to promote the Series. As part of this partnership, the top four USA CRITS Series D1 Teams on the Colavita Leaderboard after Tulsa will be given automatic invites to USAC’s June National Championships in Knoxville. 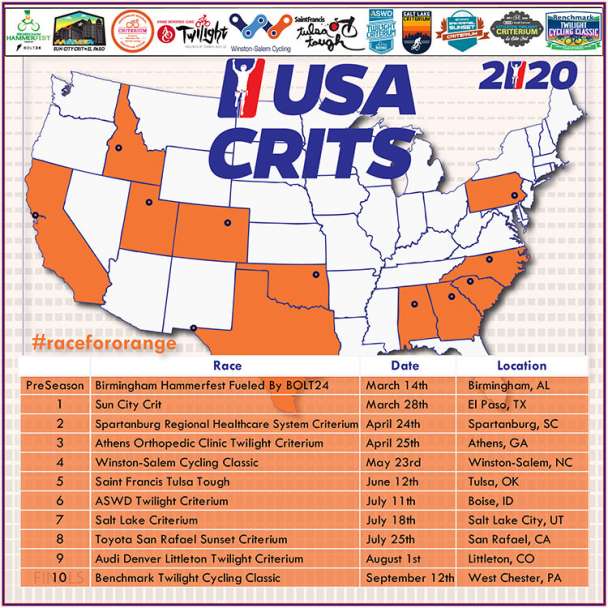 Twenty-one teams, including both of last year’s champions, have committed to joining the D1 ranks and racing across the national calendar. “A major goal of the Series has been sustainability. Seeing a dynamic increase in D1 Team participation and 100% of our 2019 calendar returning points to great progress being made for the sport,” said Scott Morris, USA CRITS Director of Development.

Combined, the Series will have over $240,000 available to teams as they compete for the D1 Team overall competition and three leaders’ jerseys. Each event scores the top four riders from each team based on laps led, in race sprints, and final event finish placement. New for 2020 will be a final prime at each event known as the Give Back Prime. This prime will allow fans to better engage the sport and support racers while also giving back to a local Ronald McDonald House in each market.

All 2020 USA CRITS events will be streamed live for free. This exciting change comes thanks to increased support from events and sponsors. “We are expecting well over one million live event views for 2020,” said Morris. “This is great for our teams, events and sponsors.” All events will be available on USACRITS.tv which will be going through a transformation to allow viewers to support efforts to grow the sport and gain access to 2020 Series replays and over 70 previous events. Additional details on a new viewing format and access to video-on-demand content will be made available in February.

USA CRITS – Partnering toward a sustainable, watchable, team-based format for the sport of criterium racing in America.

USA CRITS and Series Events Announce Give Back Prime