Photos & Report: CicLAvia Rocks the Streets of LA with a Party on Wheels

The first time that I heard about the Bud’s Ride was in 1986 while shopping at Bud’s Bike Shop in downtown Claremont.  Today,  Jax Bicycle Center – Claremont is located in the old Bud’s building. This was an exciting era in cycling –  Greg Lemond had just won the Tour de France, the US Olympic Cycling Team had won several gold medals at the 1984 Olympics in Los Angeles and the American 7-Eleven Cycling Team was beginning to break through on an international arena with a motivating stage win at the Tour de France.

Bud’s Bike Shop – Great Memories and a Piece of History

Bud’s Bike Shop, which was established in 1950,  was known as a favorite SoCal pro shop that carried high-end cycling products. It was a great place that local cyclists could work and where customers could hang out, buy some stuff and check out the latest Winning Magazine and VeloNews.   Bud’s Bike Shop was also known for its epic “Super Sale” that had lines of customers that were literally wrapped around the building who were in search of a great deal. This was commonplace at the time since it was before the internet and mail order magazines that would eventually change our buying and hanging out habits.

It’s TBT at Claremont Heritage!Today we look at the large, two-story, cube-shaped stucco building that was the home of…

Every time I would go to Bud’s, someone would inevitably talk about the Bud’s Ride and how hard it was. They also mentioned that there had never been a woman that had finished all three full laps. This both intrigued me and scared the bejeezus out of me at the same time to even try the ride. However, the next year I met my other half, who was a bike racer, and he encouraged me to give the Bud’s Ride a try after I had a good amount of riding under my belt.

When I finally got the courage to try the Bud’s Ride, it was super hard initially and always got dropped.  But after a year and half of training hard and consistently doing the ride every Wednesday (and along with the help of some experienced riders that taught me the ropes and even let me grab on to a back jersey pocket to pull me over the top of the tough Raging Waters climb), I finally got strong enough to finish all three laps on my own! Once I figured out the nuances of the ride (wind, terrain, positioning, anticipating gaps) and had the fitness to finish the ride on my own, the Bud’s Ride was still really hard, but at the same time became easier if ridden smart and my fitness was good. If my fitness declined, the ride became very challenging and I quickly knew I had some work to do.

The Bud’s Ride is held weekly on Wednesday nights on a challenging course with rolling hills that goes clockwise around Bonelli Park along the Drag Strip in Pomona and rolls through La Verne and San Dimas. If you have ever ridden the San Dimas Stage Race Road Race, then you have ridden on most of the same route. In the ’90s, the Bud’s Ride would consistently see 100 riders come out every week to get their speed and pain fix on and had some heavy hitters come out for the great training. 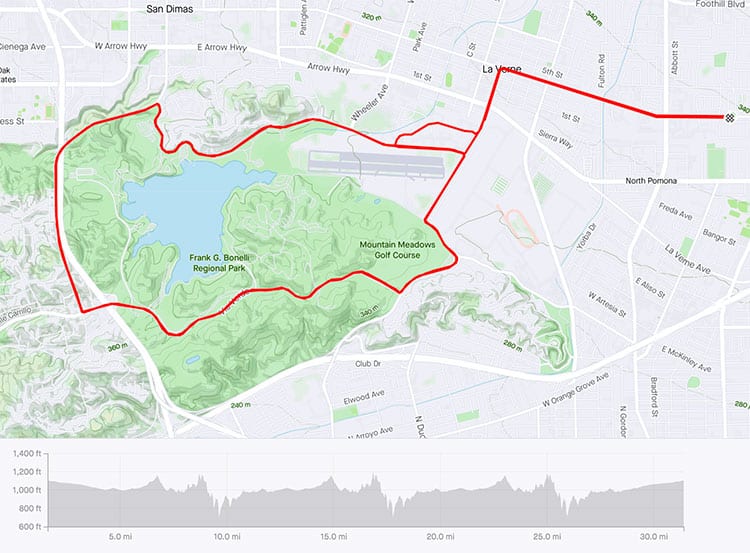 The Bud’s Ride is a great ride to test your fitness gains and tactical savvy where you can tackle certain sections of the course smartly and conservatively, if needed, to help give you the extra edge to get through the tough sections.  If a rider gets dropped, they can always cut across the Dam and jump back in the ride on the Raging Waters Hill.

It seems that the Bud’s Ride is still going on during the age of COVID. As someone that prefers to social distance and wear a mask when around others, I would personally hold off on doing the ride if I was still fit enough. So instead I will share a video below of the Buds Ride that shows an at-speed on the bike perspective of the flat section that will hopefully motivate you to try the Bud’s Ride or another bicycle training ride someday!

The Bud’s Ride is challenging, addictive, fun and a great ride to see your progress!

More info on the Bud’s Ride and SoCal Training Rides