Fabio Jakobsen added another page to his remarkable comeback story, almost two years from the injury which left him fighting for his life, confirming again his extraordinary mental strength and fighting power. That journey, which for more than eight months took him through a long and arduous recovery before pinning on a number again, continued in Denmark, where the 25-year-old racked up Quick-Step Alpha Vinyl’s second victory in as many days after an incredible rush to the line in the final meters of the stage that ended in Nyborg.

The day began with Yves Lampaert resplendent in the yellow jersey he had taken at the end of Friday’s individual time trial, when he became the first Belgian in four years to lead the Tour de France general classification, and continued in a rather uneventful manner until the peloton entered on the 18km Great Belt Bridge, where the riders were alert due to the risk of echelons. 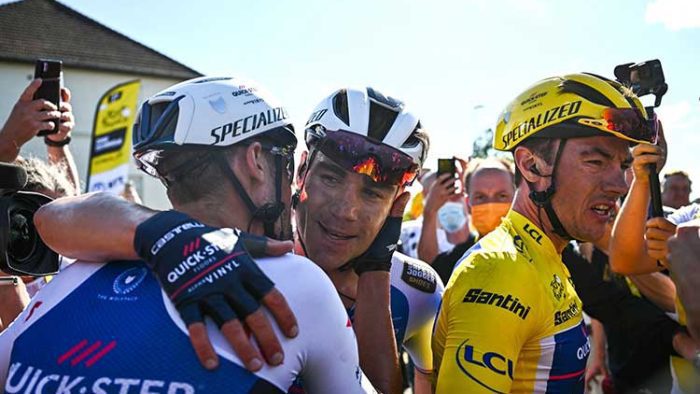 There were no crosswinds, but the tension led to a crash, the yellow jersey being among those caught in the pile-up. Fortunately, Yves had teammates Mikkel Honoré and Michael Mørkøv, the former having already put in a gargantuesque effort throughout the stage, who quickly erased the 40-second deficit and helped him return in the bunch.

The entire Quick-Step Alpha Vinyl team hit the front in the closing kilometers of the stage, with Mattia Cattaneo putting in a monumental effort that helped the Wolfpack dominate the finale, which was marred by a huge crash inside three kilometers to go. Guided by Michael and Yves, Jakobsen remained at all times near the head of the peloton, waiting for the last 150 meters to unleash a devastating sprint and beat everyone else by more than a wheel for his 11th victory of the season.

“Today is an incredible day for me. Getting here was a long process, one where I took it one step at a time, with many people helping me along the way and giving me tremendous support. This win is for them, my way of saying thank you, so that they see it wasn’t for nothing. What happened two years ago is something that will forever stay with me, but I was fortunate to overcome it with the help of many incredible people. I’m happy I still enjoy riding my bike and racing, and luckily, I can still win. It’s an amazing day, and that’s why I want to thank everyone that helped me be here.” 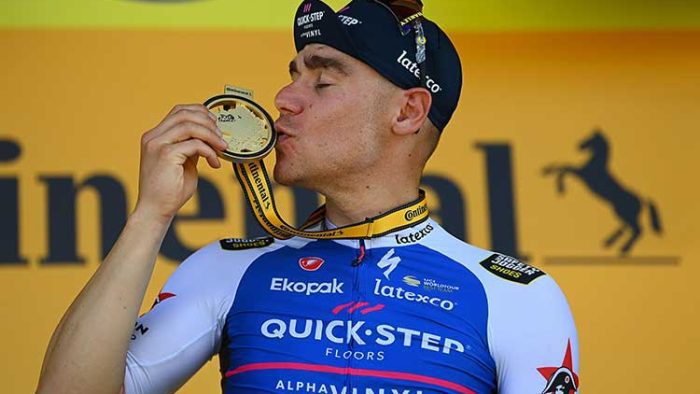 “The team did a great job, keeping me in a good position when we exited from the bridge, then on the tricky corners and on the finishing straight. I am grateful to them, this victory wouldn’t have been possible without my teammates. Once I was alone, I launched my sprint at 150 meters to go, passed the other two guys and took the win. When I tell it like this it sounds easy, but it wasn’t. At the same time, this is what we train for, this is why we race. We worked hard for this, not just myself, but also the team. Taking a Tour de France stage is something I have been dreaming about for 15 years, since I started cycling. It’s the biggest event in our sport and that’s why I will remember this for the rest of my life”, an emotional Fabio said after his sixth Grand Tour victory.