SoCalCycling.com: How did the Argyle Armada book come about?

Mark Johnson: I’ve done freelance writing, editing and photography work for Slipstream, the organization that owns the Garmin-Cervélo team, since 2007. One of the things I do for the team is help them craft sponsorship proposals. That gives me unique insights on what happens behind the scenes to keep a ProTour team financially afloat; how long the deals take to come to fruition, how many fall apart, what sponsors are looking for.

A couple of years ago it came to me that Vaughters’ team would make an interesting book subject. And by interesting, I mean a book that would be more than an account of racing action. Vaughters and his team are trying to change both the culture pro cyclists live in and the business of pro cycling.  I thought a year in their life would illustrate how racing dramas intersect with larger business and political struggles Vaughters wrestles with.

I proposed the concept to the team, and they were on board with it. My book agent pitched the book to publishers and ended up with a deal with VeloPress. Then I spent a year following the team and writing and shooting the book. I travelled pretty much non-stop from January through November of 2011, and the book published in March, 2012.   At one point in the fall I spent a week holed up out in the Anza Borrego Desert completely focused on whittling and contouring the narrative. The story in the book is about half the length of my original manuscript. 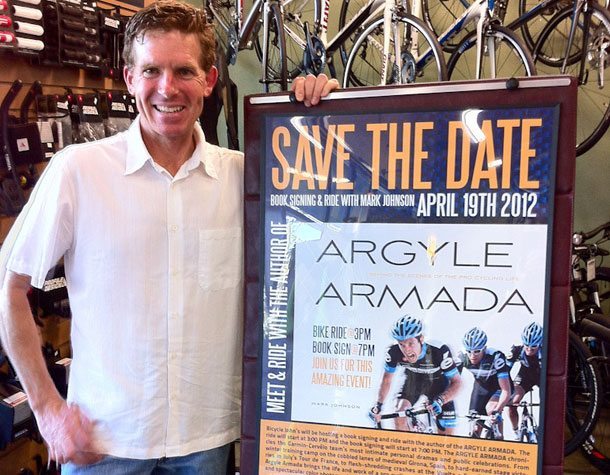 SoCalCycling.com: Team Garmin-Cervelo had one of their best seasons to date last year. This must have been really exciting to be a part of with the team winning Paris Roubaix as well as several stage wins in the Tour de France.  Can you describe your experience of witnessing these great feats?

Mark Johnson: Paris-Roubaix was magic because Johan Vansummeren was such a deserving winner. The story of domestique who solos to victory and beats the Classics superstars like Cancellara is immediately compelling.

The Paris-Roubaix race start and finish are special, too. It rolls out from in Compiègne, a polished town of cobbled streets and grand chateaus that very much maintains the trappings of its aristocratic heritage.

Then it ends in Roubaix, a gritty, working-class town that also holds one of the most iconic fixtures in pro cycling--its surprisingly run-down outdoor velodrome. Because the velodrome is less than three kilometers from the Belgian border, it feels more like Belgium than France at the finish, since most of the fans are speaking Flemish. 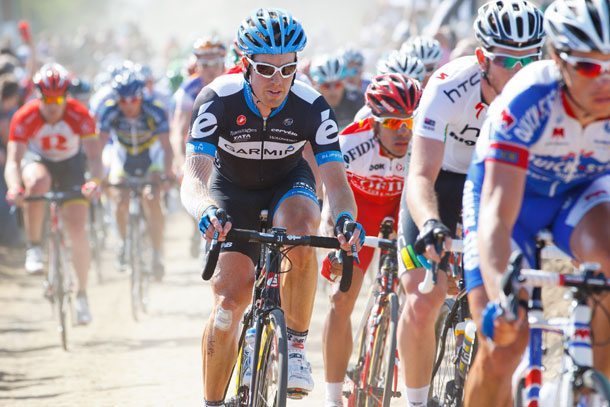 By that time, I had come to know Johan, and he is the most humble, understated guy you could ever have the pleasure of meeting. The moment he rolled into that velodrome alone was special; it was a different tenor of celebration than that I felt this year when Boonen won his fourth Roubaix. More tender and breathlessly adoring somehow, because it was all so improbable--magic like Christmas morning.

Along with Roubaix, winning the team time trial at the Tour was very significant for the team because both that victory and Roubaix proved that Vaughters’ dream wasn’t a silly pipe dream; you really could win pro cycling’s most-prestigious events without doping. Until those two wins, I think his whole “100%-pure” project was seen was some skepticism, if not private ridicule, by pro cycling’s European establishment. Without being jingoistic, those two days had additional import because they showed, as LeMond did with his Tour de France wins, that a non-traditional, innovative approach to cycling at the hands of Americans could succeed in Europe.

Those wins, along with the three additional Tour stages, Hushovd’s seven days in the yellow jersey, and the team taking the overall TDF team prize, set a new precedent for pro cycling: It’s possible to win at the highest level without cheating. Creating a place where young riders can grow without having to confront the doping decisions they might elsewhere has always been Vaughters’ goal with this team. Those victories pushed that charter out the wider world in that the whole team became a role model for both pro cyclists and other pro sports. The team became a believable object lesson, a beacon of hope for a sport that had gone through a pretty dark decade when it comes to doping. 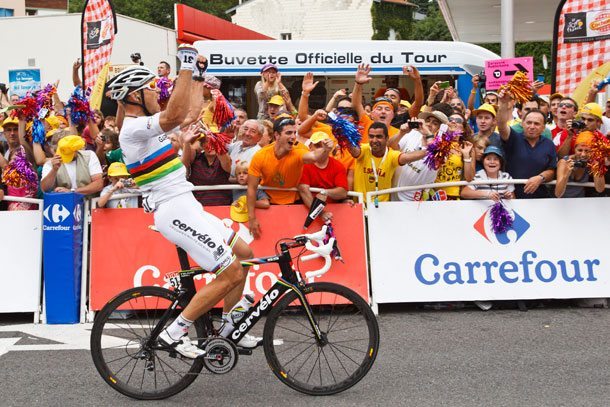 I should also point out that before I started work on this book, I thought the team was not doping — but I was also realistic about the number of cyclists who have claimed they were clean only to later reveal that they were doped to the gills. Vaughters’ project could have been a huge fraud. After a year with them, I’m convinced that the Garmin guys have really carved out a place where drugs are just not part of the scene. In fact, I think their lack of anything to hide is one of the reasons Vaughters gave me the go ahead to peer into their lives for a year.

SoCalCycling.com: What was your favorite country and event to work with the team and why?

Mark Johnson: Even though the weather can be a bit tough, especially coming from San Diego, as I do, I really liked Belgium. The friendly people, the tidy brick houses, the way the country isn’t afraid to spend money on cycling infrastructure, the big beautiful windmills that dot the landscape, the cobblestones, the bakeries and the beer,  the way riding a bike for everyday tasks is as natural to Belgians as driving 500 meters to the 7-Eleven is for Southern Californians, and the fact that more people tune into bike races on TV than any other sport (even soccer!) — I just found so much to like in that country.

As for my favorite event, it was probably the Vuelta a España. The team was suffering so profoundly at that race that it was the polar opposite of the Tour de France, where they were just driving it. That race really gave me insight on how unglamorous a ProTour rider’s life can be, and, for some reason, I found that compelling. And at the Vuelta, the crowds are minimal, so it’s really a pleasure to travel with that race since you don’t have to deal with seven hour traffic jams like at the Tour.

And the USA Pro Cycling Challenge in Colorado was off the charts in terms of crowds; that state has gone way too long without a pro bike race!

SoCalCycling.com: What I liked was how you were able to show through the lens was that how much work goes on behind the scene and how much support has to go in to support a handful of riders to compete on a top level. Can you tell us how you tried to tell a story with your photography?

Mark Johnson: Photography and writing are similar in that they both involve the controlled application of light to subjects. When writing about the Tour de France, for example, I had enough details in my notebooks and voice recorder to fill two books on that race alone. But I had to be disciplined about only shining narrative light on the events that revealed the big stories and most-telling details of that event and what it said about the riders and Vaughters’ efforts to change pro cycling.

Since this book interweaves writing and photography, the photos I selected influenced the written narrative, and vice versa. I shot nearly 100,000 images over the year, but only about 250 ended up in the book.

After I wrote the first draft, my editor and I took a first stab at choosing the photos to go with the words. We ended up picking some photos that led to me expanding the narrative in some places and contracting it in others. It was a very organic process, and in the end, I’m pretty stoked with the way the imagery follows and reinforces the narrative.

SoCalCycling.com: How long did this project take from start to finish and what is your most memorable moment?

IMark Johnson: started following the team in January, 2011 in Girona, Spain and ended with the team introducing their 2012 squad in Boulder, Colorado in November, 2011. (I racked up some serious airline miles last year traveling back and forth between San Diego and Europe.)  I turned in the manuscript in November, 2011 and worked on the photo edits and photo production through early January. The book published in March, so it was a fairly intensive last couple of months of work. Lots of coffee and not much sleep or bike riding, that’s for sure!

SoCalCycling.com: After working on this project following a ProTour Team, would you like to work on this type of project again with a different team?

Mark Johnson: I would, but it would need to be a team that is somehow plugged into a larger mission or cultural shift. Writing a book that simply re-hashes racing would not hold my interest, and I don’t think it would hold the readers’ either. Online you can read a race recap within hours of a race finish. What you can’t find, and what I think most intrigues readers, is the coalition of personal, political and financial forces that lead up to and inform the lives of the riders on that race day.

SoCalCycling.com: Where can the Argyle Armada be found and purchased?

Mark Johnson: Any online or brick-and-mortar bookstore or your local bike shop. You can also order a signed copy from my web site, ironstring.com 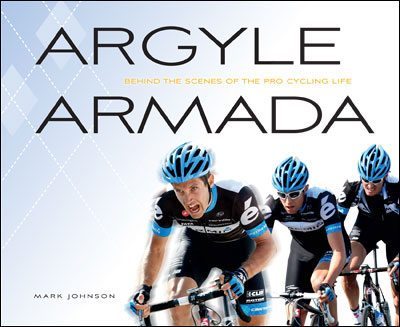 SoCalCycling.com: Do you have any book signings or book engagement coming up on the West Coast?

Mark Johnson: I’ll be at Surf City Cyclery in Costa Mesa on Thursday, May 3 and I’ll also be at the May 6 Dana Point Grand Prix, where they will also be giving out some signed books as primes.

After that, I’ve got a number of events during the Tour of California, including a May 20 event at Helen’s Cycles in Santa Monica.

I show photos from the book, tell stories about life with the riders, and take audience questions. I’ve done quite a few of these events already, and I’m really pleased with the turnout. Usually when a speaker is done with their talk, people want to get the heck out. But so far, the slide show ends and people have been just drilling me with questions about the team and the state of the pro cycling business, so it’s been quite gratifying for me, and I hope instructive and interesting for everyone who comes out.

You can see a full schedule of book events at argylearmada.com. Check back, because we are constantly adding events.

SoCalCycling.com: Thanks for your time Mark. We have really enjoyed Argyle Armada and your photography.