Erica Allar put on a masterful display of tactical savvy and speed to claim the Criterium National Championship in Louisville, Kentucky. Emma White crossed the line in sixth to finish second in the U-23 category. Allar’s win was the team’s eighth national title in the last nine days, while Eric Young’s second-place in the men’s race brought Rally Cycling’s nationals podium count to eight.

“This title is quite special,” said Allar. “It’s my first Elite criterium championship. I wouldn’t have guessed that it would have been from a breakaway, but am so pleased. Lauren (Stephens) has been riding very well so to find myself off the front with her with 18 laps to go was not something we had expected. I knew if I rode it well, played it smart, I could win the sprint. I cannot wait to line up in the Rally Cycling National Championship kit. It’s been a long time coming and such an honor to wear the stars and stripes.”

Rally Cycling dominated the race with Amy Benner covering the first couple of moves before Erica Allar, and Lauren Stephens (TIBCO-Silicon Valley Bank) rode away from the peloton. The duo quickly established a 20-second gap. With Allar out front, Benner, White, Megan Heath, Caitlin Laroche and Monica Volk took up position at the front of the race. The only rider to escape the grasp of the Rally Cycling led pack was Irena Ossola (SAS-MACOGEP) who spent most of the race chasing the lead duo alone.

A crash with five laps to go resulted in turmoil and neutralization of the race. After letting the legs cool, the riders restarted facing a brutal five lap sprint to the line. Allar and Stephens wasted little time and expanded their lead to 45 seconds with just three laps to go. Knowing the power of Allar’s finishing kick, Stephens refused to pull through in the closing kilometers, and Allar dropped the pace. The game of cat and mouse allowed Ossola to catch them on the final lap, and she wasted no time in launching a strong counterattack. Allar was quick to respond and was able to use the move to launch her sprint and take the stars and stripes.

Travis McCabe (Tucson, Ariz./UnitedHealthcare Pro Cycling) captured his first professional championship in a sprint finish for the Men’s Pro race. Most of the 65-minute contest was dominated by Brandon McNulty (Phoenix, Ariz./Rally Cycling) and Ben Wolfe (Niantic, Conn./Jelly Belly p/b Maxxis), who created a sizeable gap for more than 20 laps. McNulty tried a solo attack with four laps to go, but was chased down by McCabe and 13 other riders from the peloton on the final lap. Eric Young (Boulder, Colo./Rally Cycling) and Ty Magner (Griffin, Ga./Holowesko l Citadel p/b Hincapie Sportswear) took the second and third, respectively.

“The last lap was all-out racing. It was full gas all the way up the back climb, and I opened up the sprint with 200 meters to go, out of the corner, and held it to the line. I put my head down, and didn’t know until about 50 meters to go, and then I had a good feeling that I was going to take it. It felt great,” said McCabe, who last donned a Stars-and-Stripes jersey in 2013 when won the Men’s Cat 1 amateur criterium championship. 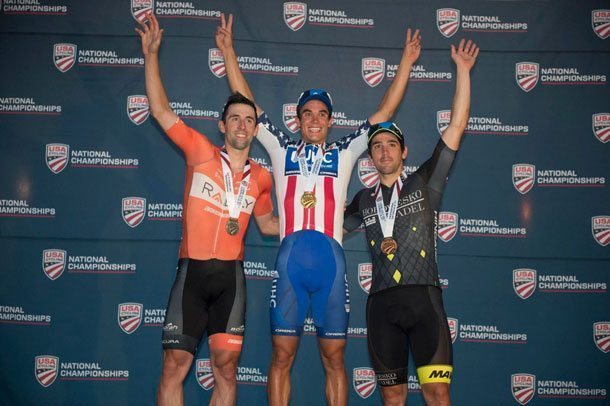 U23 and Juniors  National Criterium Championships

One of the fiercest breakaways of the day was put in by Men’s U23 national champion Thomas Revard (Carmel, Ind./Bissell-ABG-Giant). The 20-year-old attacked 30 minutes into the 75-minute slugfest and held a significant lead for 21 full laps, winning in a time of 1:12:49.  Six chasers could not get any closer than 58 seconds. From this group, Noah Granigan (Cape May Court House, N.J./CCB Velotooler) finished second and Zachary Carlson (Indianapolis, Ind./Texas Roadhouse Cycling Team) was third.

In the Men’s Category 1 criterium, Ben Renkema (Greenville, S.C./SC Competitive Cyclist) improved upon his third place finish last year and grabbed the gold on Sunday. A large pack of 16 riders finished with the same time, 1:14:09, with Renkema crossing the line first. He was followed by Hogan Sills (Terre Haute, Ind./Bissell-ABG-Giant), who finished second for a second consecutive year. Brandon Feehery (Knoxville, Tenn./Crit Life) followed in third.

For a second time in two days Megan Jastrab (Apple Valley, Calif./Swami’s Junior Development Team) edged out Katie Clouse (LIttleton, Colo./Visit Dallas DNA Cycling) for the championship jersey in the Women’s Junior 15-16 division. The winning time was 31:00 for Jastrab, with Clouse and 17 other riders finishing with a one-second time gap. Emma Workowski (Kutztown, Penn./Maloja Pushbiker Future Stars) rolled across the line in third.