Celebrate the New Year with a New Years Day Ride

The third round of US Cup-XC mountain bike event stormed into Williston, Vermont over the weekend, as the battle rages on over the $20,000 series payout for the men’s and women’s champion.

At the first two rounds in spring, the duo of pro mountain bikers Chris Blevins (Specialized) and Kate Courtney (Specialized) have shown there is a youth movement taking place in cross-country in the United States. The two have ridden brilliantly over more experienced and established rivals and continued their winning ways in Vermont at the Eastern Grind.

In Saturdays women’s race, it was quickly whittled down to a three-rider duel when Kate Courtney (Specialized), Lea Davison (Clif Pro) and Rose Grant (NoTubes/Pivot) separated themselves from the women’s field.

Coming off really good spring form in the World Cups, Courtney began turning the screws on lap two and opened up a forty second gap on Davison.  From there, Kate went untouched and pulled away over the next couple laps, soloing in for her second US Cup-CX victory and extending her lead in the US Cup Series points chase. 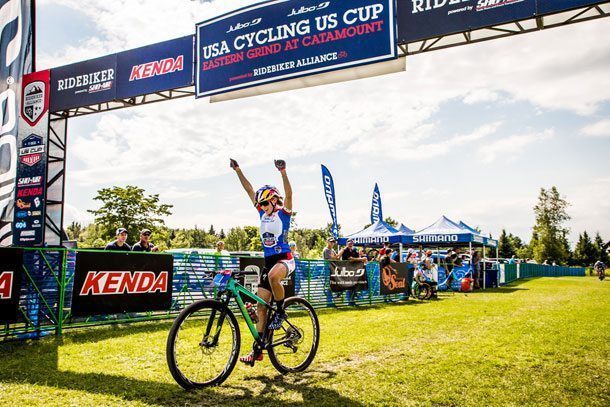 “This course was SO fun,” exclaimed Courtney following her win. “This is great preparation for nationals next weekend.”

“You had to be paying attention the whole time.” commented third place Rose Grant. “This course was great preparation for nationals, I had a blast.”

The men’s XC race went off with some fireworks right off the start, as Todd Wells slipped a pedal right out of the blocks and had to play catch up early.  Luckily all riders got through clean with team Specialized taking control of the race early. 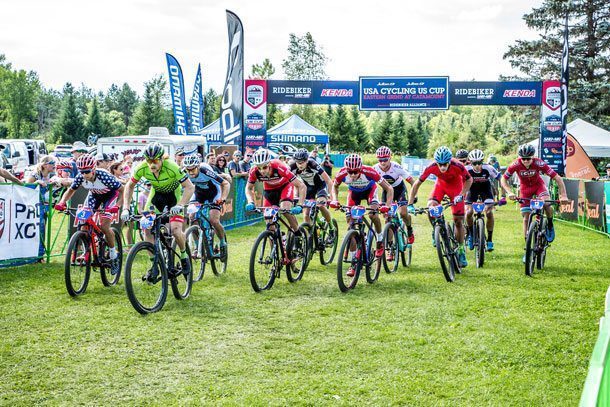 Up front reigning XC national champ Howard Grotts (Specialized) was in control over his teammate Christopher Blevins (Specialized) and current CX national champion Stephen Hyde (Cannondale P/BCyclocrossworld.com).  However, Grotts would burp a tire late on lap one and have to limp into the tech zone giving away valuable time to Blevins, Hyde and a charging Todd Wells

For the next three out of six laps, Wells continued to close the gap on Blevins and was within striking distance on the last lap.  But Blevins had gaged his effort just right and went on to a twenty second victory over Wells, Hyde, Felix Longpre (MSA) and Nick Lando (Eliteendurance.com)

“I felt really good today.” expressed Grotts post-race.  “It’s a shame I had that issue with my tire on lap one, that put me out of the hunt.”

“I just had to be patient out there and gage my effort.” said race winner Christopher Blevins. “Todd (Wells) is so good on these types of courses, he just keeps the power rolling and I knew he was charging hard.”

“I was a mess on that start,” explained Todd Wells. “I was laying on my tube tube after I slipped a pedal.  I got into the woods about 9th and from there just picked guys off.  I could see Chris right there on the last lap, but in the end just gave away a little too much time in the beginning to close the deal.”

New day, but the same faces emerged at the front of the women’s short track race.  Kate Courtney, Rose Grant and Lea Davison all found themselves with separation from the women’s group early on. 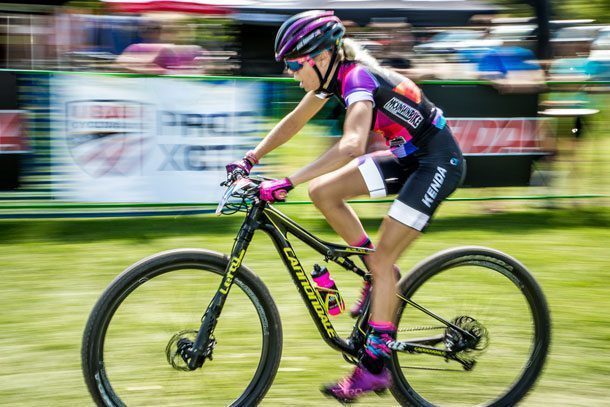 In the end, Courtney was solid again and soloed in for the win, her second on the weekend! However, the battle for second place came down to a sprint finish that was won by Rose Grant (Notubes/Pivot) over Lea Davison (Clif Bar).  Elle Anderson put in a solid ride for fourth, and Kelsey Urbnan had another great day and rounded out the podium with a 5th.

Not to be outdone by his teammates, Howard Grotts took revenge on Sunday’s short track to take the win by almost a minute.  Grotts is looking on point to defend his title next weekend at USA Cycling Nationals in West Virginia. 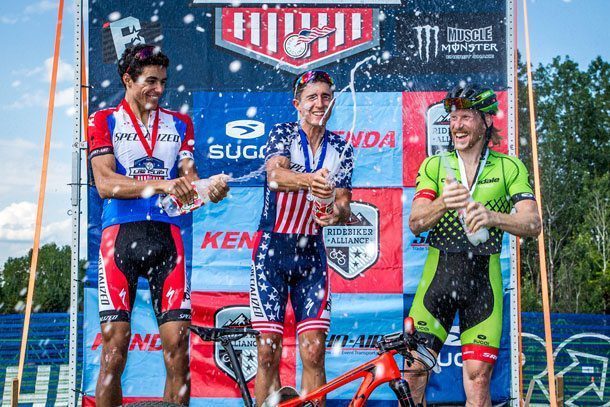 **Series finals take place on July 29th and 30th in Boston, where the men’s and women’s champions will be crowned and awarded $10,000.00 respectivley.  The Boston Rebellion is a U.C.I. HC mountain bike event.