Due to the generosity of Regence BlueCross Blue Shield of Oregon, title sponsor for the 2017 Cascade Cycling Classic , the Nicole Reinhart Fund, MBSEF, and the generosity of individuals participating in the GoFundMe campaign, the men and women’s prize purse will now be the same as what is listed for the men’s, through the top 15 positions in the UCI fields.

The initiative began three weeks ago once the race organization began to finalize the technical guides and prize purses for the race. They realized the significant disparity in the prizes and went to work to see what could be done to change them.

Just before racing got underway, controversy hit social media regarding the issue soon after the tech guides were released.

Prior to the sponsors and the community raising money, there was a limited amount of money set for the prize purses. Due to the minimum payout regulations, the race organization was unable to split the money that was available, equally.

“The men’s and the women’s minimum are two different numbers,” John Schiemer explains, MBSEF Executive Director. “We had actually increased the women’s over the minimum but only to what we could do at that time.”

“Through the help of Regence (BlueCross Blue Shield of Oregon), and the Nicole Reinhart fund, along with the GoFundMe page, and MBSEF is also contributing some as well, we’re able to make the prize purses equal.”

“Early on when we made the decision to go UCI, we were lead to believe by USA cycling that the prize purse would be very similar to where we were already at,” Schiemer added.

“Last year, if you look back at the prize purse, we were equal to the top 15 places for both races. The men’s race pays to top 20 and the women’s race pays to the top 15 (on GC). Obviously, we’ve all been bothered by this issue. It’s not right, and so I have been having discussions all week with donors on this.  We were able to finalize it today. “

The race organization would like to sincerely thank Regency BlueCross BlueShield of Oregon especially, but also our other sponsors and donors in our community and around the cycling community at large, for helping make this happen.

**Below is the prize purse listed in our tech guide. The new purse for the UCI women will be the same as that listed for the men up until 15th place. 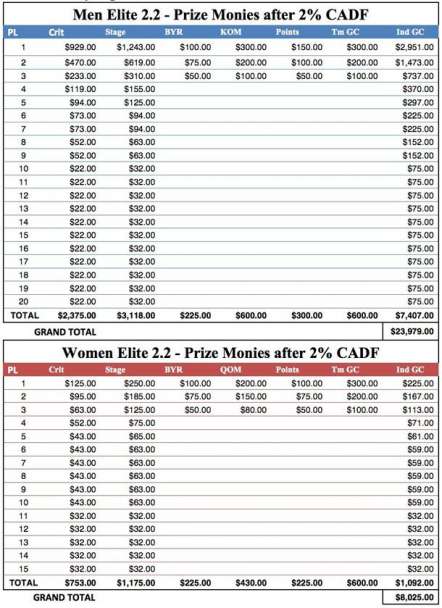