Pre-season Resistance and Base Training

Ewan and ‘King of California’ Sagan Round out Podium after 83.6-mile Circuit Race

Stage 1 presented by Breakaway from Cancer® featured 12 laps of a 7-mile circuit that showcased crowds lining downtown Long Beach iconic locations including the waterfront, Bixby Park and Retro Row. An early breakaway pulled away to a 2-minute lead at the midpoint of the stage, containing Holowesko|Citadel p/b Arapahoe Resources’ Andrei Krasilnikau (BLR) and United Healthcare Pro Cycling’s Tanner Putt (Boulder, Colo.) who was awarded the Breakaway from Cancer® Most Courageous Rider Jersey for his inspiring ride.

“My legs felt really good during the race. I’m happy to do a good job for my team, and we’re happy to win the stage,” said Gaviria.

In addition to claiming the stage win, 23-year-old Gaviria, who is making a comeback from a hand injury earlier this season also closed today with the TAG Heuer Best Young Rider Jersey and the Visit California Sprint Jersey. Rounding out the top five for the stage were KATUSHA ALPECIN’s Marcel Kittel (GER) in fourth, and UAE Team Emirates’ Alexander Kristoff (NOR) in fifth. 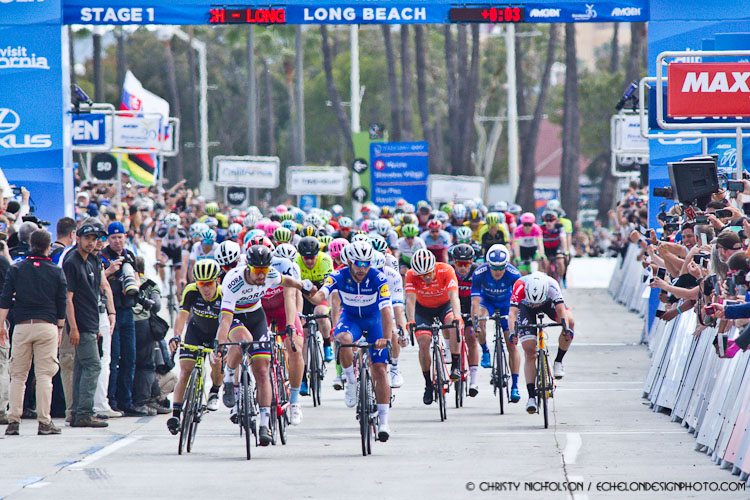 The Queen Stage comes early this year with tomorrow’s Stage 2 presented by Lexus leading cyclists 96.3 miles from first-time host Ventura to a fan-favorite finish atop Gibraltar Road in Santa Barbara County. The stage features 7,700’ in elevation gain and a 3,100’ climb over the final eight miles.

“We couldn’t be more thrilled with today’s kick-off of the 2018 Amgen Tour of California,” said Kristin Klein, President, Amgen Tour of California and Executive Vice President, AEG Sports. “The incredible crowds, which were nine or ten deep along some parts of the course, were certainly treated to international cycling at its best. Between today’s sprint to the finish in Long Beach and tomorrow’s epic climb up to the top of Gibraltar Road, our fans this week are certainly going to see the most talented athletes in cycling today.”

The 2018 edition of America’s premier cycling stage race will cover 645 miles of roadways, highways and coastlines during seven stages from Long Beach to Sacramento May 13-19, while the Amgen Tour of California Women’s Race empowered with SRAM, showcasing the world’s best women cyclists, will run concurrently May 17-19, covering upward of 187 miles over three stages. The annual professional cycling events are the only U.S. races on the UCI WorldTour calendar and continue to attract some of the most renowned cyclists and teams in the world.

Returning as title sponsor for the 13th consecutive year, Amgen, a biotechnology company in the race to dramatically improve patients’ lives, is proud to sponsor the Amgen Tour of California. Similar to the cyclists who will compete intensely to win during the Amgen Tour of California, Amgen scientists and staff have a level of perseverance, determination and skill that is unmatched in the industry in order to help win the fight for patients worldwide.

“Today’s healthcare options for treating serious illness are more promising than at any other time in our history,” said Laura Hamill, senior vice president, U.S. Business Operations, Amgen. “And, now more than ever, patients living with serious diseases such as cancer and cardiovascular disease can look to the future with greater hope. Our sponsorship of the Amgen Tour of California gives us a platform to discuss, educate and empower patients to have hope and believe in innovation to live a longer, healthier life.”

Off Season Criterium Series Kicks Off this Sunday