Quick-Step Floors’ Fernando Gaviria (COL) claimed his second win at the 2018 Amgen Tour of California, his sixth of the season. Gaviria further cements his comeback from a hand injury earlier this year, with the stage podium result duplicating Sunday’s Stage 1.

“We are happy because [it was a] really nice victory today…these guys [teammates] are really strong, and I’m really happy,” said 23-year-old Gaviria.

The final miles of the mostly fast and flat course to Elk Grove saw chaos on the road beginning with Team Dimension Data’s decorated sprinter Mark Cavendish (GBR) suffering a wheel mechanical with under 10 miles left to ride. Despite losing time on the repair, he was able to work his way back up to the main group, narrowly escaping a crash in the final couple of miles that took several riders out of contention. 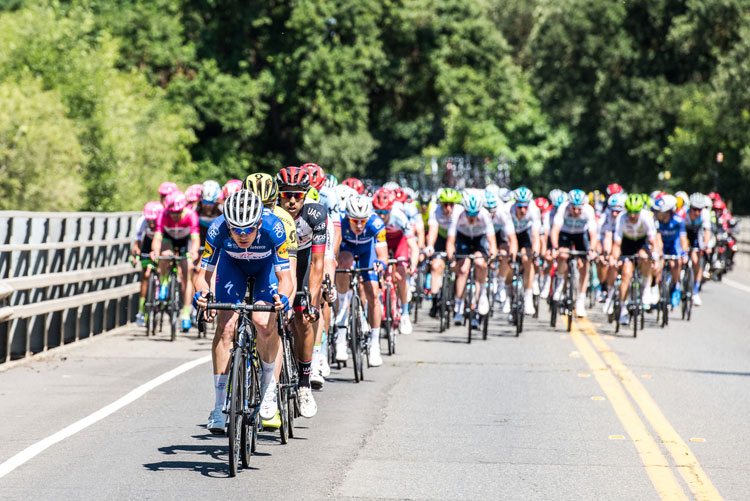 Favored sprinters for this stage suffered tire punctures in the final few miles: Team KATUSHA ALPECIN’S Marcel Kittel (GER) and Mitchelton-SCOTT’s Caleb Ewan (AUS), who was able to rebound and propel himself in the final meters from fourth position to end the stage in second, just ahead of BORA-hansgrohe’s World Champion Peter Sagan (SVK). Ewan’s ride earned him a start tomorrow in the Visit California Sprint Jersey.

“It’s gonna be a really aggressive race tomorrow. Bernal is gonna for sure do everything he can to try to wrestle this jersey off of me, and I’m gonna do everything I can to keep it on my back,” said van Garderen, the 2013 Amgen Tour of California Champion.

Bernal retains the Lexus King of the Mountain Jersey and the TAG Heuer Best Young Rider Jersey for the fourth day. For his part in the breakaway, Fabian Lienhard (SUI) received the Breakaway from Cancer® Most Courageous Rider Jersey.

“Today I just was able to surf the bunch and stay hidden from the wind and my teammates just made sure that I was protected and in the right spot in the end,” said Ryan, whose sister Alexis Ryan is also in the race with Canyon//SRAM. “All the hard work and heartbreak and all the suffering I’ve gone through just finally paid off… It’s just huge for me – I’ve never won yellow, I’ve never been on a stage like this before and won a race like this… You’re with the best of the best in the entire world and everyone shows up with their A-game and everyone shows up with their top team for this race, and you have to do everything right.”

The opening stage for the women’s race returns to Elk Grove, which made its first race appearance last year, for an 80-mile day with two Sprints and no Queen of the Mountain climbs (QOMs) – a very fast and flat route that delivered the expected bunch sprint to the finish.

Just over halfway into Stage 1 presented by Visit California, a breakaway including BePink’s Lisa Morzenti (ITA) and Hagens Berman | Supermint Pro Cycling’s Whitney Allison (Fort Collins, Colo.). Allison spent solo time off the front to earn the Breakaway from Heart DiseaseTM Most Courageous Rider Jersey before being reabsorbed by the peloton as they began arranging to deliver their sprinters to the finish with about 6 miles left to ride.

Presented by Visit California, tomorrow’s Stage 6 (M) and Stage 2 (W) both include the HC climb up Kingsbury Grade. The women will spend the day on a 67.1-mile climb-centric day in South Lake Tahoe, where the men will also finish after a 122.1 mile trek including seven categorized climbs that they’ll begin to encounter shortly after they depart from Folsom.

The 2018 edition of America’s premier cycling stage race covers 645 miles of roadways, highways and coastlines during seven stages from Long Beach to Sacramento May 13-19, while the Amgen Tour of California Women’s Race empowered with SRAM, showcasing the world’s best women cyclists, runs concurrently May 17-19, covering upward of 187 miles over three stages. The annual professional cycling events are the only U.S. races on the UCI WorldTour calendar and continue to attract some of the most renowned cyclists and teams in the world.

Amgen is raising awareness of heart disease by leveraging its sponsorship of the Amgen Tour of California Women’s Race empowered with SRAM to encourage Americans to take charge of their risk of heart disease and feel empowered to take action for good heart health.

Breakaway from Heart Disease™ encourages Americans to take charge of their risk of heart disease and represents a partnership between Amgen and the American Heart Association. The initiative is dedicated to empowering everyone to take action for good heart health through diagnostic screenings, courtesy of the American Heart Association, as well as providing information and tools related to physical activity and healthy eating. Amgen also has a partnership with the bike company Schwinn to encourage heart-healthy activities like bike riding.

Throughout the women’s race, local community members who are living with heart disease will participate in the official start ceremonies as well as award the daily Breakaway Most Courageous Rider jersey, given to the athlete whose performance best exemplifies the character of those engaged in the fight against their disease. The jersey celebrates the athlete’s courage, tenacity, inspiration, optimism and resolve.

In addition, the athletes have the opportunity to personalize their Breakaway “I Ride For” bibs and recognize someone in their life impacted by heart disease or cancer. Hagens Berman | Supermint Pro Cycling’s Whitney Allison won the Breakaway from Heart DiseaseTM Most Courageous Rider Jersey today and Fabian Lienhard (SUI) received the Breakaway from Cancer® Most Courageous Rider Jersey.

Photo Gallery: A Look Back at the Amgen Tour of California