Nutrition and Training: Hydration for Cycling

Bicycling and the Law: Bicycles and Wrongful Death: Proving Fault

The Colombian prodigy of Quick-Step Floors became the first rider

Fernando Gaviria didn’t waste any time in leaving an indelible mark over the 105th Tour de France, as he produced a perfect sprint on the uphill drag to Fontenay-Le-Comte to win the opening stage of the race and don the first yellow jersey, capping off a perfect day for Quick-Step Floors, one during which our team has been prominent from the very outset, first by chasing and reeling in the breakaway, and then by setting up the sprint of the 23-year-old debutant.

“It’s incredible, I don’t have enough words to tell you how I feel on this amazing day. I was thinking of the victory, but to take also the yellow jersey was a dream, a dream which I turned into reality thanks to the beautiful work of all my teammates, who rode their heart out for me and made sure of bringing me into the best position for the final. That’s why this win isn’t just mine, is of the entire team”, said Fernando, whose palmares includes now days spent in both the maglia rosa and the maillot jaune, two of cycling’s most prized jerseys.

The 201km-long stage which rolled out from Noirmoutier-en-l’Île was a quiet one until the last ten kilometers, when just moments after the three escapees got caught – thanks mainly to Tim Declercq’s outstanding effort – everything blew up due to a crash which splintered the peloton, leaving only 70 riders in the front. The drama continued, as other riders crashed or punctured out of the group, which was led by Niki Terpstra and Philippe Gilbert, who put down the hammer, stretching out the field as the Quick-Step Floors train was beginning to assemble. 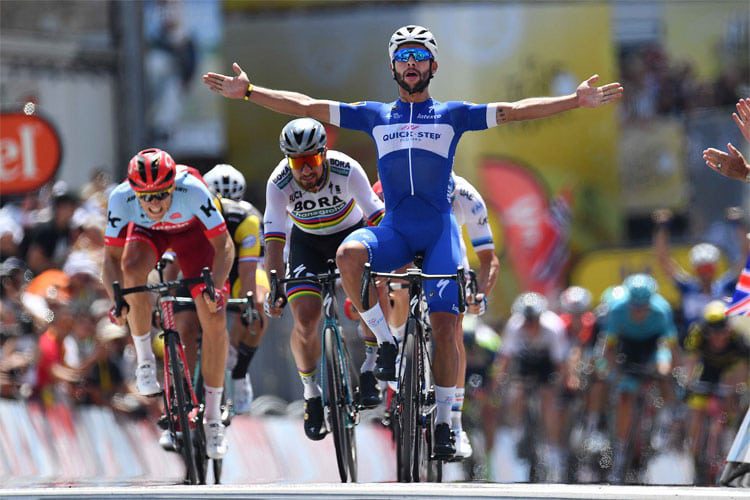 Liège–Bastogne–Liège winner Bob Jungels led under the flamme rouge arch, before Belgian Champion Yves Lampaert upped the tempo as he dived into the last corner, with 750 meters to go. Once Yves peeled off the front, Max Richeze showed why he is one of the best lead-out men in the business, keeping his cool as the peloton was traveling at 60 km/h and ideally launching Fernando Gaviria, who held off the charge of Peter Sagan (Bora-hansgrohe) and Marcel Kittel (Katusha-Alpecin) to take the most important victory of his career so far.

First day in the Tour de France, first victory, first yellow jersey – all these made for a remarkable achievement and a fantastic debut of Fernando Gaviria, whose maiden outing at the Grande Boucle has been highly-anticipated since last year, when he cruised to four stage wins and the cyclamen jersey at the Giro d’Italia.

“Being the first stage of the Tour de France it was pretty stressful, but the guys perfectly organized themselves, kept me protected and overcome all the obstacles, be it crosswinds or roundabouts, which came thick and fast in the final kilometers. It was thanks to their work and the strong legs I had that I could beat two strong riders and take a yellow jersey Colombia had been waiting for 15 years.”

“I don’t know for how long we will keep the yellow jersey in the team, for now all we want is to enjoy this beautiful moment, continue taking it day by day and see how things unfold. It’s true that I also scored important points today, but I’m not thinking of the green jersey, it’s still too early for that. It’s a proud and happy day of my life, which motivates me even more for the upcoming stages”, concluded Fernando Gaviria, the fifth rider in the history of Quick-Step Floors to take the Tour de France yellow jersey, after landing the team’s 33rd stage win at the century-old race.