The temperatures were in the high 30°s as riders set out for the first UCI WorldTour race since the season was suspended in March at the Strade Bianche in Italy. The dry conditions would make the famous white roads of Tuscany even dustier as the racing covered the undulating 184km parcours, starting and finishing in Siena. While none of the riders knowing what their own form would be like, let alone each other’s, this didn’t stop the attacks going out from the start, a small group allowed to build a two-minute advantage. This group tried hard, but BORA-hansgrohe’s Daniel Oss and Marcus Burghardt led the charge, catching them with 78km to go. The small leading group was made up of just twenty-five riders, and multiple attacks stretched this group along the road, with eight riders – Maximilian Schachmann among them – eventually forming a lead and steadily building on their advantage. Shrinking in size as the racing took its toll, with 30km to go it was six riders on the front with a 1:30 lead, the German National Champion still up there – although the chasers were closing in. Knowing they were losing time, Maximilian went on the attack with 21.5km to go, taking one other rider with him, forcing the remaining members of the break to respond. With just over 10km remaining, Team Jumbo-Visma’s Wout Van Aert went on the attack and, with only two riders able to react to this move, the day’s winner would come from this trio of riders. Racing through Siena’s famous streets to the line and up the brutal 12.4% final climb to the line, Maximilian just didn’t have the legs to take second place behind Van Aert, but his excellent performance, fighting hard throughout the race, saw the German National Champion take the final spot on the podium.

From the Finish Line
“It was a very hard, very tough race and I knew one of the key factors today would be how to manage the heat. So, I cooled myself often, I rode the first four sectors really easy at the back and I could see that everybody was tired. In Santa Maria I felt I had quite good legs and I tried a little bit in the last part. In Santa Maria I almost crashed twice, we could barely see anything with the dust, so in the last sector I went a little bit easy and I think it was a mistake. Van Aert was able to go away, I tried to catch him but that meant I spent all my energy and couldn’t make it for the sprint. However, overall, I think it was a good start to the second part of the season.” – Maximilian Schachmann, BORA – hansgrohe 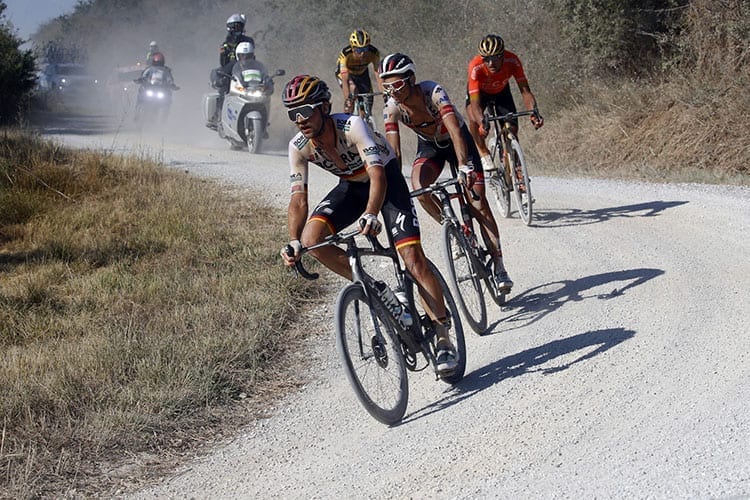