10 Year Anniversary and Registration for the Tour of Long Beach

The 2022 Tour de France route has been announced and will feature racing in four countries including Denmark, Belgium, Switzerland and France. This is the most countries since 2017. Denmark will become the 10th country to host the Grand Départ, and the most northerly in the Tour’s history. In France, the race will visit 8 regions and 29 departments.

There will be 21 stages:

The 2022 Tour will start on 1st July, on a Friday and not on a Saturday as usual. This is to allow for the transfer to France following the three Grand Départ stages in Denmark.

There will be 9 new stage towns that will  be hosting the Tour for the first time: 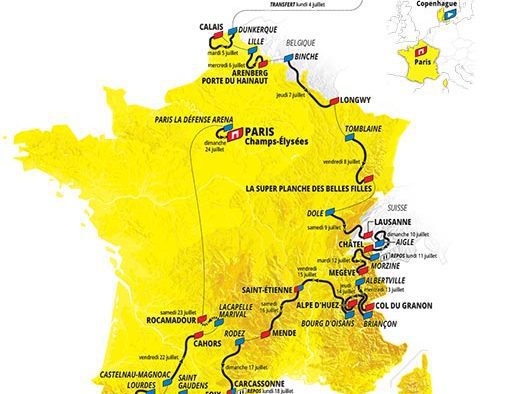 The Vosges, Alps, Massif Central and Pyrenees are the four mountain massifs that will feature in this 109th edition, appearing in that order. There’s one climb, the Col de Spandelles (1,378m) in the department of Hautes-Pyrénées.

They’ll be making their return after a four-year absence. Stage five Lille Métropole > Arenberg Porte du Hainaut will feature 19.4km of cobbles, split across 11 sectors, ranging in length from 1.3 to 2.8km.

53km is the combined distance of the two individual time trials in the 2022 Tour: 13km on the opening stage in the centre of the Danish capital, and 40km on the penultimate stage between Lacapelle-Marival and Rocamadour.

The first, second, and third riders across the line on each stage will receive a time bonus of 10, 6, and 4 seconds, respectively.

A total of 2.3 million euros will be awarded to the teams and riders, including € 500,000 to the final winner of the overall individual classification.

The inaugural edition of the Tour de France Femmes Avec Zwift is scheduled for 24th to 31st July 2022, at the Palais des Congrès in Paris this morning.
The eight stages that make up the event capture the essence of cycling past, present and future, from the Champs-Élysées, where the opening stage will be decided right before the men’s Tour de France comes to a close, all the way to the Super Planche des Belles Filles, not to mention the Ballon d’Alsace and a white gravel road stage in the vineyards of Champagne.