The New Generation of Cycling

Closing out day three at the 2018 Amgen Tour of California, and rebounding one year later at the race where his team pulled him after suffering a concussion and broken collarbone, Trek-Segafredo’s Toms Skujins (LAT) made a late race move that paid off, along with Hagens Berman Axeon Cycling Team’s Sean Bennett (El Cerrito, Calif.) – one of the youngest in the race at 22 – together creating a gap that held all the way through the Laguna Seca Recreation Area’s speedway finish line.

The pair pounced on the final big climb of the day with the peloton trailing by less than 10 seconds when they turned onto the Laguna Seca raceway. The remaining sprinters in the chase group including World Champion Peter Sagan (SVK), who won the stage the last time it finished at the speedway in 2016, jockeyed for position as they tried to chase down the duo, but the gap held with Skujins crossing the finish solo followed by Bennett three seconds later, and Mitchelton-SCOTT’s Caleb Ewan (AUS), who is prepping for his first Tour de France appearance this summer, rounding out third.

“The only time I actually dreamed about it [the stage win] was in the last 300… I expected someone to come from the back full throttle but I guess it had been a hard day for everyone with the wind and just the hard pace. And the breakaway was really strong that went in the beginning. And that all played into my advantage,” said Skujins, whose prior victories in California include 2016 (Stage 5) and 2015 (Stage 3). “It’s definitely not the easiest run into the final… I’ve raced on Laguna Seca before and that definitely helped me… I knew how to play it.”

Stage 3 presented by Lexus was the race’s longest with a 122.4-mile stretch featuring five KOMs and 8,300’ of elevation gain from first-time host King City, where the cyclists were cheered on by 2,000 local schoolchildren, to Laguna Seca Recreation Area in Monterey County, where the field met a fast, technical sprint finish.

The break of the day included a trio of U.S. riders: Hagens Berman Axeon Cycling Team’s

Ian Garrison (Decatur, Georgia) and Rally Cycling’s Robin Carpenter (San Diego, Calif.) and Evan Huffman (El Dorado Hills, Calif.), who won two stages last year. Garrison was the last man standing as the others were picked up by the peloton on the Laureless Grade climb and was awarded with the Breakaway from Cancer® Most Courageous Rider Jersey.

The day of tough climbs shattered the peloton with many of the field’s sprinters losing contact with the main group and riders still trailing in minutes after the leaders finished. Quick-Step Floors’ Stage 1 winner Fernando Gaviria (COL) had a mechanical on the downhill from Laureless Grade that took him out of contention for the final sprint. 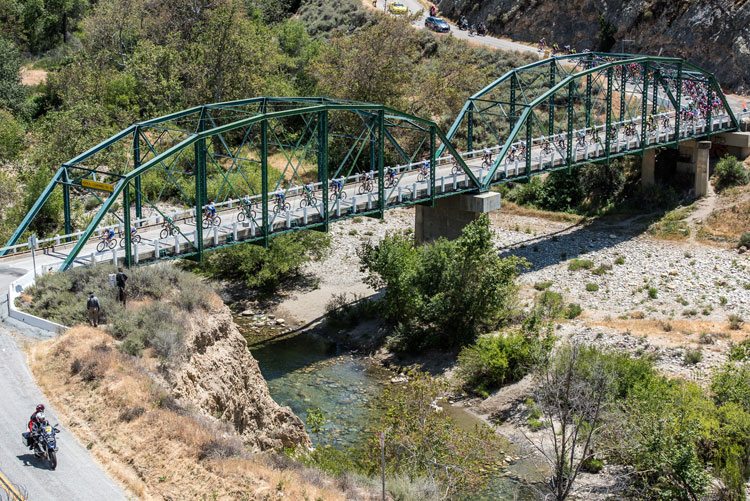 Tomorrow’s individual time trial event in San Jose / Morgan Hill will feature cyclists racing the clock one by one. With Bernal having gained significant time over other time trail specialists and GC contenders with his epic Gibraltar Road climb Tuesday, the stakes are high for this stage as riders with race champion ambitions will seek to make up time and pull closer to him in the overall standings. In addition to Bernal, Yousif Mirza (UAE) of UAE Team Emirates is the other current National Time Trial Champion in the peloton.

Study:  The UCI ’s Findings from a Public Study on the Appeal of Road Cycling