Photo of the Week: Power to the Pedals

The Southern California Velo Cycling Club (SC Velo) and Incycle Bicycle Stores are sponsoring a Christmas Toy Collection Drive which began on Friday, November 23rd and will conclude on Sunday, December 16th with a Toy Ride to take the collected toys to the San Dimas Sheriff’s station so that they can be distributed to needy families. Everyone is invited to join with SC Velo and Incycle to support this worthy cause by donating toys and/or participating in the Toy Ride. 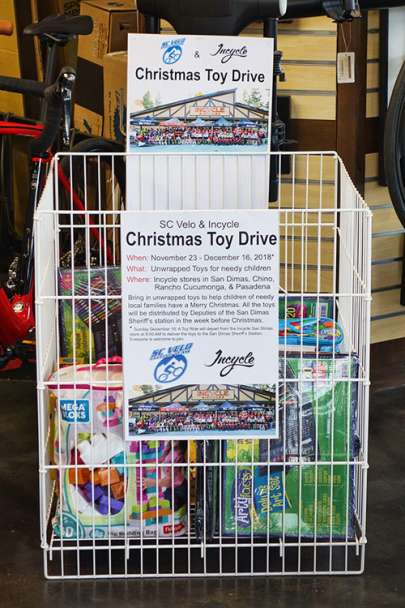 The SC Velo Toy Ride will depart from the San Dimas Incycle store on Sunday, December 16th at about 9:00 AM for an easy, no-drop, 1 hour+ ride to the San Dimas Sheriff’s Station to turn the collected toys over to Los Angeles County Sheriff’s Department representatives.

All toys collected as part of this drive will be delivered to kids of needy families by deputies from the Los Angeles County Sheriff’s San Dimas station.  Last year, the San Dimas station was able to help a large number of families during the Christmas holiday because of the Toy Drive.