Monuments of Cycling, a premier cycling events producer, announced the expansion of its Belgian Waffle Ride (BWR) series and the relaunch of the Tripel Crown of Gravel Series with a new edition to the BWR locations in 2021. The first stop is the 10th Annual Edition of the BWR in San Diego, on July 18. The second is in Asheville, NC, on August 21. The third event of the Tripel Crown is in Cedar City, UT on September 25, and there is the fourth and final BWR event (and the opportunity for a Quadruple), the brand new race in Lawrence, KS, scheduled for Halloween, October 31, 2021.

The BWR is known as the most unique cycling event in the United States, with each location offering its own special features, topography and regional sensibilities and atmosphere. Online registration for all events opens February 1, 2021, at 9 a.m. (PT) at BelgianWaffleRide.Bike. For those thousands of riders who have already signed up for the 2020 BWR events, their entries have been deferred to 2021.

The Hell of the Mid-West

For the first time, Monuments of Cycling brings its iconic BWR to Kansas, where a vibrant cycling culture anxiously awaits this new spectacle, The Hell of the Mi-West, which will take place on Halloween. The BWR, which celebrates 10 years in 2021, will provide professional and amateur cyclists the opportunity to ride the most coveted roads and off-road sectors throughout the northeast region of Kansas over a 111- mile route punctuated by dozens of dirt, rock and gravel sections that give the event its unique complexion.

Hosted by Sunflower Outdoor & Bike Shop at a spectacular Lawrence location, this fall BWR’s start, finish and expo will take place along a scenic riverfront park. The route features rolling passes, rough and rocky outcroppings, lake and river views, forests and rivers and water crossings. Riders will get a bit of everything thrown at them: hard-packed, flat, loose, rocky, uphill and downhill gravel over a 111-mile route punctuated by off-road sector and single-track sectors and 8,000 feet of climbing, all of which give the event its challenging complexion.

The Hell of the West {Coast}

To lead off 2021, the Canyon BWR in San Diego, on July 18, will feature three new aspects: 1) a newly augmented 135-mile route with fresh new off-road features, 2) a spectacular new venue large enough to accommodate thousands of competitors, 70 vendors, and mile-long finishing circuit within its perimeter, 3) the three-day party will feature new events, including a Friday night Road-Cross Criterium, live music and a massive beer garden.

The Hell of the North {Carolina}

The second BWR for 2021, presented by Sierra Nevada and Sufferfest Beer Co. will take place on August 21 in Asheville, NC at the Ride Kanuga location, an incredible destination nestled on 1,400 stunning acres in the Blue Ridge Mountains. Its historic setting features a beautiful 30-acre lake, 20-miles of trails, and full-service meeting and lodging facilities for up to 440 guests. The race will be the longest of the series at roughly 144-miles and 12,000 feet of climbing.

The Hell of the South {Utah}

The third and final event of the Tripel Crown of Gravel Series is the 2021 BWR Cedar City, on September 25, the only one at elevation in the scenic and rugged West Desert of Southern Utah. At nearly 80% off-road, this is a true gravel edition of the BWR, graced with the most coveted decomposed granite roads and tricky off-road sectors throughout the region. The event is again being hosted by the town of Cedar City and will feature a 128-mile route that winds through the famous Red Hills, the Parowan Gap along Little Salt Lake, Coal and Whitney Canyons, and Granite Mountain.

Created as an extremely challenging race in the spirit of the great European one-day Spring Classics, the BWR is an unusually difficult race. There will be three distances at each location: the long Waffle route and a half-distance Wafer option for those looking to get a taste of the fun without the life-changing commitment of the Waffle. Plus, we’ve added the Wanna ride, which is roughly half the Wafer. Each venue will have a local bike- minded charity. BWR planners will raise funds and awareness for community causes in each location, much as it does the San Diego Mountain Biking Association (SDMBA) in San Diego. 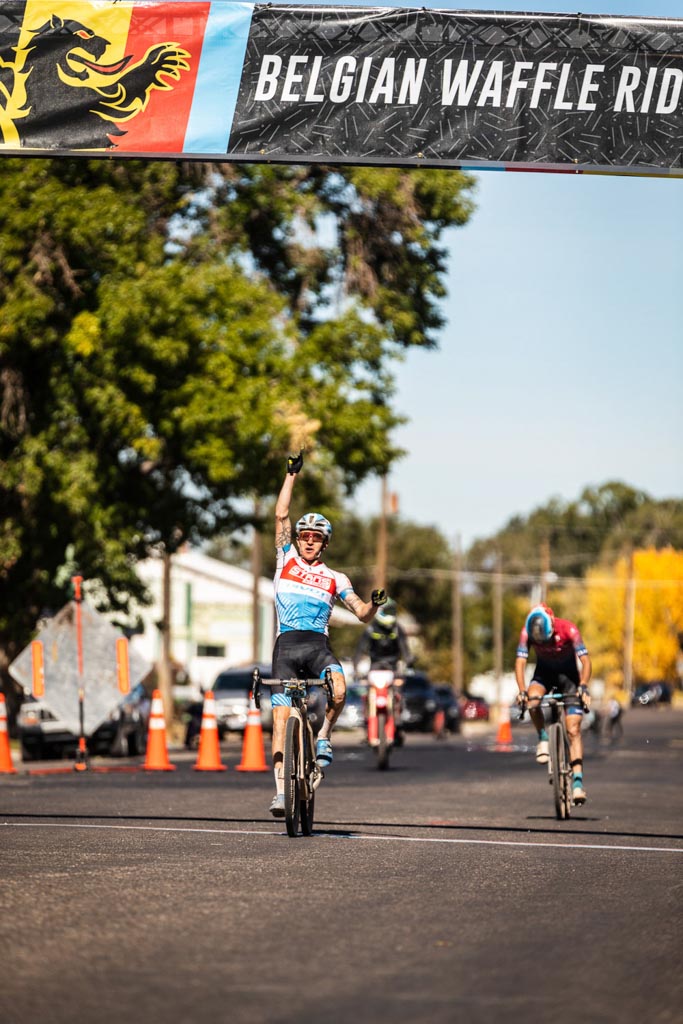 Each Waffle will offer a prize purse to top-five finishers, female and male. The Tripel Crown of Gravel Series has a separate prize purse to the top three men and women overall across the SD, NC and UT events, based on cumulative times. An age group competition will award top riders in each age bracket with Tripel Crown of Gravel honors. All riders who register and complete all four 2021 BWRs will receive special awards for their Quadruple heroics.