From Riding Solo to Riding with the SoCalCycling.com Team, by Ronnie Toth

Training: The Off-Season is Where the Successful Cyclist is Made

The Criterium State Championships would be a battle from the teams and individual riders where the finish would most likely come down to a sprint.

With L39ion of LA coming to the Criterium State Championships with seven riders and their strong performances in all the Criteriums this year there would be some surprises! Well almost.

So with a strong field on the start line, turned out to be an aggressive race with riders wanting to open their legs up and test the other riders to see who was strong.

There were many riders eager not to have it come down to a field sprint so there were many attacks during the race but nothing really stayed out for more than a few laps at a time before getting absorbed by the field.

However, with the race winding down and a few laps to go there was a counter-attack from a previous break. There would be three riders leaping out of the field with an all-out effort to change the race dynamic.

The three riders consisted of John Janneck (SoCalCycling.com Team) Jason Paez (LABC) and Jacob Longo (Go Fast – Incycle). These riders went all in to open a gap that would put L39ion of Los Angeles on the front to close the gap as they usually do but more to control the pace. However this time, L39ion of Los Angeles had to chase a little harder which would cost them a little more energy before heading into the last lap. From that point, we would see the SoCalCycling.com Team get organized behind them sitting there ready to pounce when the time came to help out our fast guys. 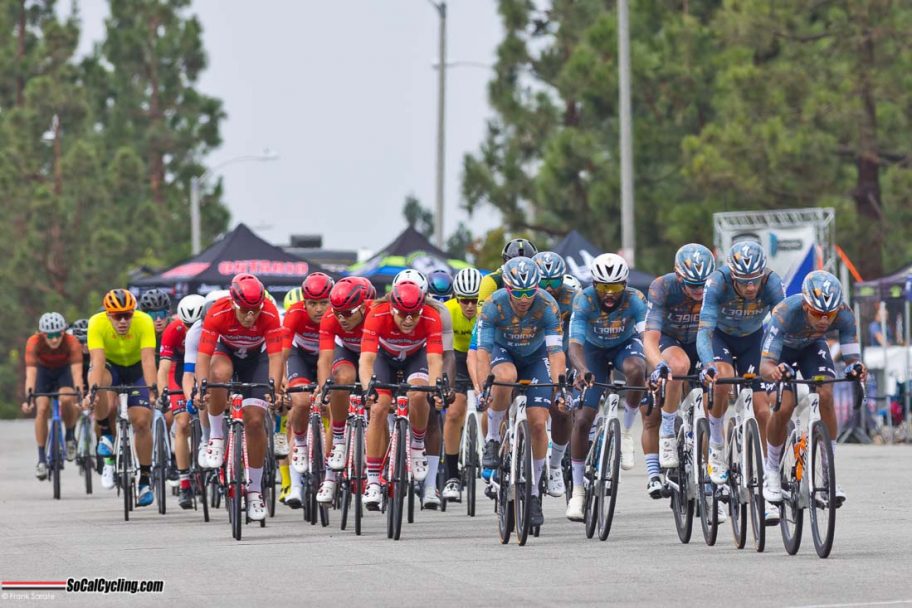 Heading into the last lap, the three breakaway riders John Janneck (SoCalCycling.com Team) Jason Piaz (LABC) and Jacob Longo (Go Fast – Incycle) got absorbed and the SoCalCycling.com Team train took over to keep the pace high so it wouldn’t be a cluster heading into the sprint. In most races this year, the Legion of LA team typically controls the last remaining laps.

With the crowd surprised that the SoCalCycling.com Team was on the front taking control for our fast guys, it was suspenseful waiting to see what was going to happen to come around the last corner on the final lap. With a race within a race (since the jerseys were up for grabs for the Pro, Cat 1, and Cat 2 categories) the win for the race would make things a little complicated.

As the riders rounded the last corner, the SoCalCycling.com Team riders were still near the front along with Legion of LA and other fast riders.

With my B-Day the following day it was an early gift to see the SoCalCycling.com Team perform so well. It’s really been a pleasure to watch these young but experienced batch of riders come up through the ranks and see myself and Christy’s hard work pay off for the next generation of riders and see them perform constantly during the whole season for the SoCalCycling.com Team.

We definitely want to thank all our sponsors as well who make all of this happen.

CicLAvia Kicks Off 2023 Season with Beer Collaboration and Fundraiser