SoCalCycling.com Team Apparel is Available for Purchase Through March 14th

Emma Grant ‘Everested’ Up Mt. Lemmon to her fundraising goal for No Kid Hungry

La Vuelta Virtual on ROUVY, last weekend, had a magnificent wrap-up in Madrid. Everyone witnessed the amazing story of Ward Simons who became the first winner of La Vuelta Virtual ‘22 at the in-person Grand Final. The pharmacist from Belgium managed to beat 9 competitors on the stage placed in the center of Madrid near Plaza de la Lealtad.

Using augmented routes and a multi-year official partnership with La Vuelta, ROUVY organized the digital ‘22 edition of the Spanish tour for everyone to participate in a real fitness effort, but from home. La Vuelta Virtual ‘22 was launched in July with a weekend warm-up racing series that enabled its winners to have a VIP visit to Spain for the real Vuelta in September.

Numbers from the virtual tour that took place from Aug 19 – Sep 11 along with the real Vuelta:

10 riders were selected in the open international races to be present in person and compete next to the former MTB World Champion and Olympian, José Hermida and popular UK cycling blogger, Cameron Jeffers.

The contenders came from 6 countries – Great Britain, Spain, Czech Republic, Denmark, Belgium and Sweden. They all had the same conditions – a Zycle Smart ZBike and the ROUVY app with the shorter 25km version of the last stage – Stage 21 of La Vuelta 2022.After a half-hour warm-up, all riders were at the start and the race began. The 25km segment first made its way over the modern Puente Sobre bridge, past the sports grounds and universities. The stage ended in a sprint finish with the fans cheering in front of the stage including Ward’s girlfriend. 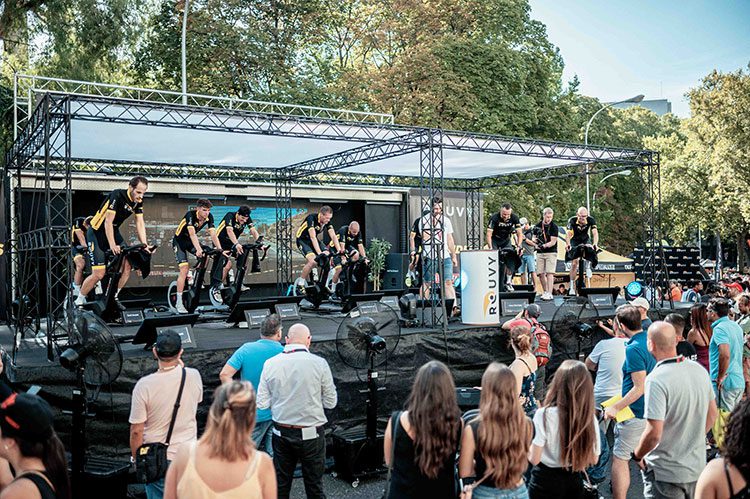 Ward Simons (Belgium) demonstrated an impressive high and stable wattage and ended up with a 387W average (5,3 W/kg) in total, which gave him the win. He stepped on the podium for the first time alongside Daniel Pink (UK) and Andrew Emmerich (Sweden), where he received the winner’s trophy.

That wasn’t all, not at all. After enjoying drinks and food in the VIP section where everyone could watch the final 21st Stage of La Vuelta with other riders, there was one more surprise for Simons. When Remco Evenepoel confirmed his maiden Grand Tour title at La Vuelta and stood on the main stage, Ward Simons was invited to stand on the same stage alongside Remco (also a Belgian) and celebrate the win together (!), which probably turned this into the most memorable and precious moment of his sporting life. He stated: “Today was the day I was the closest to getting to be the real cyclist.”

Social impact for the local community

Petr Samek, CEO of ROUVY: “ROUVY committed to donating 10 EUR, for every finisher of LV Grand Final, to Fundacion Tambien. But as usual, we are taking a step further and almost tripling the donation amount to 5K EUR. We are delighted to host the event in Madrid and happy to support inclusivity initiatives. Our product has a special category purposed for hand cycling, so people and athletes with disabilities all over the world can enjoy ROUVY on equal terms with others”.

The President of Fundacion Tambien, Teresa Silva Fernandez added, “It was a pleasure to attend the virtual La Vuelta event organized by ROUVY; it was a privilege and very exciting to see the best riders in the world competing live. We would really like the ‘adapted cycling’ to be a part of this initiative next year too, so that we can collaborate together, raising awareness of inclusive cycling for people with disabilities in the world”.

The 2022 edition of Vuelta a España is over, but anyone who wants to try what it is like to be a World Tour rider can find the routes here and ride anywhere and anytime from the comfort of their own home.

ROUVY is a digital racing platform that brings the experience of real-life cycling competitions to your home. ROUVY offers thousands of exciting virtual roads to join the pro peloton online or compete with friends. Overlaying augmenting avatars over the geo-synced video footage, ROUVY makes home training both realistic and fun. Cycling enthusiasts and the most demanding athletes are welcome to cycle the world from home to stay fit or get ready for the next race!

! Not all races on ROUVY require a smart trainer. So, if you don’t have one, just create an account, download the app and start pedaling through beautiful and amazing placing around the world.

ROUVY: La Vuelta’s Virtual Grand Final in Madrid – Ride along with the Champions from home!

Ride, Run or Walk to Help Lead the Charge against Cancer at the UCI Anti-Cancer Challenge